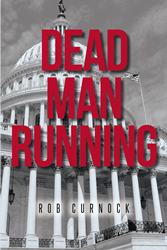 “Dead Man Running”: an engrossing narrative that shares the real-life exploits of a political candidate who ran for Congress and caused a long-awaited change within his district. “Dead Man Running” is the creation of published author Rob Curnock.

Curnock shares, “Did you ever wonder what running for an elective office like Congress is really all about?

“Running for Congress is a world all unto its own, and in today's divided America, it's not for the faint of heart. ‘Dead Man Running’ clearly shows what can be expected on a personal level in a high-stakes political race. A candidate has to understand the arrows coming at him are unrelenting and dangerous, but it's the arrows that come from behind that can do the most damage.

“Like a real-life political ‘Rocky,’ ‘Dead Man Running’ takes you behind the scenes and into the heart and mind of one candidate who dared to accept the seemingly impossible challenge, despite the odds. With his own Party's establishment convinced there was no hope of victory, one average American citizen was forced to go it alone with only the help of dedicated grass roots volunteers. ‘Dead Man Running’ is the true story of an unlikely candidate who challenged a powerful, entrenched congressman and began the chain of events that would bring real change to that district.

“Written in a reporting style that moves the plot along quickly and holds the reader's attention, ‘Dead Man Running’ is very prescient in light of what's happening in politics today.”

Published by Christian Faith Publishing, Rob Curnock’s new book also serves as an edifying exposition to the machinations of politics and election that greatly impacts the country’s state of affairs.

This book presents an in-depth recollection of one political novice’s electoral challenge to a major political player that paved a way for a true congressional reversal.

View the synopsis of “Dead Man Running” on YouTube.