“Good News for Latter-Day Saints (Mormons)” from Christian Faith Publishing author Robert James, is a fascinating account that helps readers understand the religion and the beliefs of Mormon people around the globe, both in the past and to the present day. 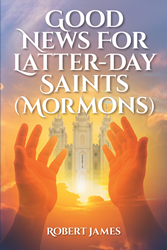 Robert writes, “It is no exaggeration to say that the Mormons (the Latter-day Saints) are a fascinating people. Since 1830, they have been a part of the great mosaic of America. Persecuted by mobs, driven from place to place, their incredible courage in the face of unrelenting hostility has wielded them into a formidable presence, especially in the State of Utah.

“Founded in New York State by the charismatic Joseph Smith Jr., who said he was personally commissioned by God to restore pure Christianity to the world. The ‘Book of Mormon,’ this ‘most perfect book’ was his initial written, binding revelation to his church.
Joseph Smith was a controversial figure in his day—accused of being a fraud, a racist, a womanizer, a disrupter of good morals, and a dictator. One thing he did do well was to gather people into his church, make them believe in themselves, and strengthen them into being a formidable force for Mormonism.

“Smith led them through armed conflict against hostile neighbors, even against government militias. Gun battles and extreme violence were commonplace. Eventually, Joseph Smith was captured and assassinated, all this by age forty. Nobody was convicted of his murder. Smith is perhaps the most understudied, under-estimated, and misunderstood character in American history. ‘He was no ordinary man.’

“When his successor Brigham Young led the Latter-day Saints to a place of sanctuary (today’s Salt Lake City, Utah), it was one of the most epic, unifying journeys in American history.

“In the past, some of their unusual practices were total obedience to the leadership, blood atonement, and polygamy. Some of these were discarded (1890), so today most Mormons are good neighbors. However, there are Mormon “outlaws” who still practice such unsavory things, hoping to resume them all, especially polygamy.

“One goal of the early saints was to conquer Missouri, next the entire country, then the world. Today, the Mormon Church is one of the wealthiest and most powerful organizations on the planet. Its influence and missionary outreach are worldwide. As possibly the fastest-growing faith in the world, maybe someday they will succeed. Then what will follow?”

Published by Christian Faith Publishing, Robert James’s new book welcomes the readers to the world of Mormons so they may be able to see their strong faith and what their relationship is with their God. It is not what you expect.

View a synopsis of “Good News for Latter-Day Saints (Mormons)” on YouTube.

Consumers can purchase “Good News for Latter-Day Saints (Mormons)” at traditional brick & mortar bookstores, or online at Amazon.com, Apple iTunes store, or Barnes and Noble. It is also available as an e-book (Kindle) from Amazon.com at a much lower price.

For additional information or inquiries about “Good News for Latter-Day Saints (Mormons),” contact the Christian Faith Publishing media department at 866-554-0919.