Robert Porter’s newly released “Salvation: Before and After” is a potent handbook that shows to readers the powerful effect of prayer on one’s life

“Salvation: Before and After” from Christian Faith Publishing author Robert Porter is a riveting memoir designed to give hope to the readers no matter how hard their situation in life is. In this book, the author encourages the readers to open their eyes so they may be able to see the power of prayer. 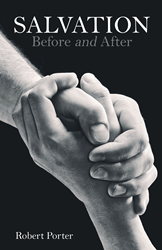 Porter writes, “Robert (Bob) Porter has been in the architectural business for forty-eight years. He has had his own design firm and has been incorporated since 2004. God has blessed him and his business to the point of being at the top of referral lists such as Angie’s List and HomeAdvisor since 2008. Prior to those years, however, Bob had fallen into the world of alcohol and drug abuse. He was a young man who was not happy about his life choices. The problem he found while in the midst of that world was that there seemed to be no way out, and the guilt he felt made it easier to continue, mostly because he wanted to cover up his life and all of his failures. During the course of the state he was in, he was imprisoned, had a contract out on his life, and died during an overdose. The world he was living in was full of destruction and death. Unbeknownst to him was the fact that he had friends and strangers praying for him for several years. He found out that God loves us so much that he never gives up on us. When Bob accepted that, his life changed completely.”

Published by Christian Faith Publishing, Robert Porter’s new book shares a remarkable reminder to the readers that they should never lose their faith in God no matter how hard and dark their lives are.

Through this book, the author wants the readers to realize that praying is the only thing that everyone needs to do for them to get out of the darkness and see God in their lives.

View a synopsis of “Salvation: Before and After” on YouTube.

Consumers can purchase “Salvation: Before and After” at traditional brick & mortar bookstores, or online at Amazon.com, Apple iTunes store, or Barnes and Noble.

For additional information or inquiries about “Salvation: Before and After,” contact the Christian Faith Publishing media department at 866-554-0919.