Recent release “Revolution: Hell’s Revenge – Heaven’s Response” from Page Publishing, author Robert W. Parsons, is a stand-alone, continuing sequel that detours from the lives of two brothers as they continue to deal with unheard of myths and legends as their wealth, secrets, and challenges test their wits against a wide array of adventures that still lie ahead. This adventure in “Revolution” will take readers beyond their own belief system, both spiritually and mentally, as Michael becomes the myth, the legend that have only been seen in the movies. 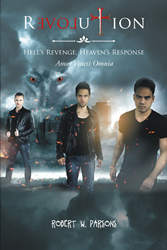 Robert W. Parsons has completed his new book “Revolution: Hell’s Revenge – Heaven’s Response” again, a stand-alone, page turning narrative about identical twins Matlin and Michael, specifically with Michael’s after death, life-changing journey that is mixed with historical facts, new friends and the continuing drama that occurs throughout one’s life including unexpected, unbelievable happenings that only the twins believed in as their Native Americans culture handed down to them in story telling’s over the generations.

Parsons writes, “Ever wondered what might have happened if Jesus survived the cross? Ever wonder where vampires came from and why they do not exist today? Whatever happened to the Knights Templar? Did they all disappear? Were they wiped out completely? What happened to their wealth? If someone harmed you, would you not react? If you had a second chance in life to do good, would you take it? Do we need a new superhero of light in this dark world of ours? A different kind of revolution takes place and wins since love conquers all. Introducing Salvatore, the new superhero.”

Published by New York City-based Page Publishing, Robert W. Parsons’s profound tale shows the astounding diversity of the cast of characters and features gripping scenes as the real truth in history is told from those who lived it. Cliffhangers leave readers wondering of what is about to come next.

Readers who wish to experience this riveting work can purchase “Revolution: Hell’s Revenge – Heaven’s Response” at bookstores everywhere, or online at the Apple iTunes store, Amazon, Google Play, or Barnes and Noble.
“Twin Memoirs: Volumes 1, 2, 3 and 4” along with “Flight of the Revelation” (Matlin’s dream on mortality) can also be found along with this new release which was Michael’s dream on immortality. “Twin Memoirs: Volume 5” will be released in 2020 after “Revolution: Hell’s Revenge – Heaven’s Response”. When one has revenge in play, there will be a response with a revolution forthcoming. “Revolution” is an in-depth story that completes a touched upon storyline in book 8.

“Twin Memoirs: Volume 6” will be released late in 2020 and “Resurrection”, released in 2021, will end the series, maybe. But who will be resurrected? Another cliffhanger?
For additional information or media inquiries, contact Page Publishing at 866-315-2708.
About Page Publishing: