Chicago attorney Robert A. Clifford, known for personal injury, medical malpractice and aviation law is recognized by Super Lawyers as one of Illinois’ top ten lawyers for 2014. 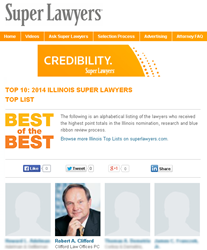 Robert A. Clifford was named one of 2014’s best attorneys in the state of Illinois by Super Lawyers.

Robert A. Clifford is the founding partner of the nationally recognized Chicago personal injury law firm, Clifford Law Offices, which focuses in aviation, transportation, personal injury, medical negligence, and product liability law. He is recognized nationally as a bar leader, and was inducted in 2011 as the 135th President of the Chicago Bar Association. In 2013, he was named as one of the top 100 Most Powerful Chicagoans. Clifford was featured on the cover of the inaugural 2005 issue of Illinois Super Lawyers magazine. He was called "Chicago's Most Likeable Tough Guy” and "Chicago's Most Feared Attorney.

According to the Super Lawyers site, “Super Lawyers is a rating service of outstanding lawyers from more than 70 practice areas who have attained a high-degree of peer recognition and professional achievement. The selection process is multi-phased and includes independent research, peer nominations and peer evaluations.”

To learn more about Robert A. Clifford’s recognition, visit: http://bit.ly/1ajFhKo

Robert A. Clifford was named by Chicago Magazine as one of the top 100 Most Powerful Chicagoans in 2014, remains committed to raising the quality of the practice of law in the state of Illinois and promoting civility. Clifford was named the 2012 Chicago Lawyer Person of the Year. Based upon his trial accomplishments, and his contributions to the legal community and the Chicago area, his colleagues nominated him for the prestigious honor given to one person each year. He is the founder of Clifford Law Offices, a nationally recognized personal injury law firm in Chicago concentrating in aviation, transportation, personal injury, medical negligence, and product liability law. To learn more about Robert Clifford visit http://cliffordlaw.com/attorneys/robert-a-clifford/

Clifford Law Offices is ranked one of the top law firms in Illinois as well as in the country in the area of complex personal injury and wrongful death cases such as medical malpractice, aviation litigation, products liability, premises liability and transportation litigation. It also has developed a reputation in qui tam litigation or whistleblower cases and handles class action matters as well as commercial litigation cases. Robert Clifford, senior partner at the firm founded in 1985, was named 2012 Chicago Lawyer Person of the Year by Chicago Lawyer magazine and one of the top one hundred most powerful Chicagoans in 2013. To learn more about Clifford Law Offices, visit CliffordLaw.com or call 312-899-9090.

Robert A. Clifford, PartnerWe are a nationally respected law practice. Clifford has the distinction of being selected by Super Lawyers, a peer-review organization, as the number one lawyer in the state of Illinois in 2014, marking the sixth consecutive year of this top honor.

2014’s Best Attorneys in Illinois by Super Lawyers.his marks the sixth year that Robert A. Clifford is named as a #1 lawyer in Illinois. This recognition on the 2014 Illinois Super Lawyers “Best of the Best” Top Ten List goes to lawyers who receive the highest point totals in the nomination, research and