After the original Wind-up Knight had over 10 million downloads, the sequel is now available in the iiRcade Store. 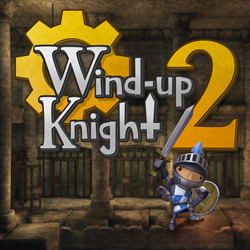 It has incredible graphics with a beautiful 3D world that makes for an amazing modern arcade gaming experience. Wind-up Knight 2 brings all new challenges to gamers on the iiRcade

iiRcade Inc., the ultimate connected arcade machine that allows gamers of all ages to play their favorite retro and modern games in arcade style at home, is pleased to announce that Wind-up Knight 2, officially licensed by Robot Invader, is now available in the iiRcade Store.

The sequel to the original Wind-up Knight, which had more than 10 million downloads worldwide, Wind-up Knight 2 is a 3D platformer that features a bigger world, new mechanics, breathtaking graphics and even more insidious levels.

Players will find themselves double jumping over spike traps and diving sword-first into a crazed Hippogriff while fighting through checkpoints, bouncy pads, ice blocks, warps, rolling boulders, and a whole slew of new mechanics in Wind-up Knight 2.

“The original Wind-up Knight was a very popular game that was played by millions and we’re excited to bring this fun 3D platformer to the iiRcade,” said Jong Shin, founder & CEO of iiRcade. “It has incredible graphics with a beautiful 3D world that makes for an amazing modern arcade gaming experience. Wind-up Knight 2 brings all new challenges to gamers on the iiRcade.”

All games are officially licensed and available at affordable prices, and new titles are continuously added to the growing iiRcade store library. The iiRcade Store can be accessed on phones or via browser on PC or Mac through the iiRcade store link.

About Robot Invader
Robot Invader is a game development studio based in Silicon Valley, responsible for hits like Wind-up Knight, Rise of the Blobs, and Dead Secret. We warped our brains watching '50s monster movies in glorious black and white. Now we're making video games for phones, consoles, and VR headsets. http://robotinvader.com