Robots and AI Spell Change for Workers, Rather Than Replacement, per Cowden Associates

Elliot Dinkin: What automation appears to have in store for the job market is not massive downsizing, but changes in job description and reallocation of some repetitive chores. 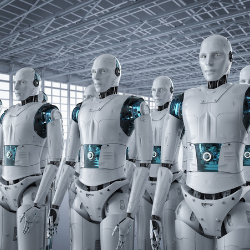 Elliot Dinkin, CEO of Cowden Associates, notes how much automation has played a factor in the future of the workforce.

“In the future as in the past, automation will play a role in these decisions—but only as one of a number of factors, all of which need to be taken into account. What matters is to understand the situation, and to handle it in a manner fair to all parties."

In late 2017, the McKinsey Global Institute released a report estimating that the relentless march of automation could eliminate up to 73 million jobs in the U.S. by 2030.[1] “Automation is certainly a factor in the future of the workforce,” says Elliot Dinkin, a nationally known expert in actuarial, compensation, and employee benefits issues. “There are indications, however that its effect on downsizing may be less than what has been predicted. The largest corporate layoffs of this century to date, for example, seem primarily to have been caused not by advanced technology, but by market changes, mergers, and plain old bad business decisions.”[2]

This assessment was echoed by participants in a recent conference on the future of the worker held at the Stanford School of Business. In 1950, the U.S. Census Bureau listed 250 separate jobs; of these, the conference noted, only one, that being elevator operator, has been completely eliminated. (And some of the elevator operator’s tasks, like greeting visitors and guiding them to the right office, have been redistributed to receptionists and security guards.) Conferees also pointed out that automation has its limits. Elon Musk, founder and chief executive of Tesla Motors, said, “Excessive automation at Tesla was a mistake. To be precise, my mistake. Humans are underrated.”[3]

One reason automation and computerization may loom so large in near-future predictions, industry experts suggest, is the spectacular increase in availability, and decrease in cost, of computer power. Given the capabilities of even an average smartphone, it is easy to forget that the underlying procedures—the algorithms that drive functions like big data and machine learning—have not changed significantly in more than 40 years.[4]

It is also, Dinkin notes, easy to forget that under the right circumstances, automation facilitates business growth and thus stimulates employment rather than threatening it. The Ford Motor Company introduced the auto assembly line in 1913, reducing assembly time from 12 hours per car to about one and one-half hours—and enabling an enormous upsurge in production.[5] Since then, the auto industry has continued to embrace automation, along with job-changing concepts like lean manufacturing. It has also continued to hire people; between 2011 and 2017, auto making and auto supplies employment increased by almost 50%, adding nearly 130,000 jobs in the U.S.[6]

Another too often overlooked aspect of the future labor market, says Dinkin, is worker availability. Hal Varian, chief economist at Google, points out that while most popular discussions of technology center around replacing people with machines, current demographic trends point to a coming substantial drop in the supply of labor. According to Varian, the demographic effect on the labor market is 53% larger than the automation effect—meaning that when both are considered, both employment and real wages are more likely to increase than decrease.[7]

“In the future as in the past,” says Dinkin, “workforce reductions will always be a possibility. In the future as in the past, automation will play a role in these decisions—but only as one of a number of factors, all of which need to be taken into account. What matters is to understand the situation, and to handle it in a manner fair to all parties. In our own business practice, we urge both labor representatives and corporate management to approach workforce decisions with as little passion and as much analysis as possible.”