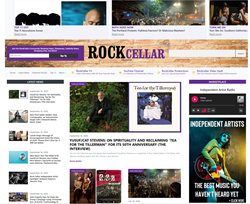 Rock Cellar will be further expanding its scope in the coming months, adding more content on a regular basis and engaging with music fans on an even larger basis

From inception, Rock Cellar has kept music enthusiasts “up to speed” with breaking music news, with the latest music releases from classic rock artists, and brought awareness to noteworthy new and upcoming bands and artists. “Many of the places where we used to find out about new music have essentially gone away,” stated Wachs. “Record stores have closed, radio stations play the same old things, and live shows are basically nonexistent this year. The new music that is out there by Santana, the Pretenders, Elton John and many others, for the most part, is going completely unheard. And learning about new artists, new music? Forget it. Think of Rock Cellar as the new community hub for all that info and more!” A portal for all things music for the music fanatic, connoisseur, fan, player, follower –for everyone passionate about music – Rock Cellar’s deep content includes the latest-breaking music, celebrity and national news, interviews, videos, and much more.

Rock Cellar’s most popular feature is its daily morning S.P.E.E.D. email. S.P.E.E.D. stands for “Short Posts that Educate and Entertain Daily,” and provides the answer to the question: “Where can I find out about new music?” with timely, 100% free delivery.

The Rock Cellar website archives features and interviews in a monthly magazine-type format, delivering up the biggest musical artists of all time, “Top 11” lists, “Behind the Curtain” exposés, “Turn Me On” to new music articles, and the “RockCellarTV” video collection of in-depth celebrity interviews and performances recorded in the Los Angeles-based Rock Cellar Studios.

The e-commerce Rock Cellar Store,rockcellarstore.com, lets shoppers browse literally millions of musical offerings in CD, vinyl, and digital downloads. Popular purchases include a vast array of compilations and box sets from bands and artists of every musical genre, along with the “Best Music Ever” and the latest in new music.

Rock Cellar’s new Independent Artists Program is highlighting emerging talent, helping spread their name and music to a wider audience while serving as a virtual storehouse for their music and merchandise, and supporting their charitable causes. Rock Cellar is encouraging independent musical artists and bands to contact them about the program.

Rock Cellar’s goal of “bringing people together through music.” has led to a partnership with the L.A.-based non-profit “Get Together Foundation” (GTF). For 15 years, GTF has raised money through all-star concerts and fundraising events – with 100% of the proceeds going to a host of important causes and charities. Recently Rock Cellar & GTF co-sponsored a celebrity-studded live-stream concert/telethon that was viewed by over 50,000 people in 70 countries. The “All Together Now” telethon raised $125,000 for essential workers battling COVID-19.

Rock Cellar will be further expanding its scope in the coming months, adding more content on a regular basis and engaging with music fans on an even larger basis. Stay tuned for much more from Rock Cellar!

For the expanded story on the Rock Cellar rebranding, click here.