In her latest book, Olympia LePoint reveals the secret decision-making science for generating your best future yet. 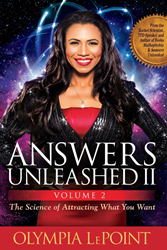 Answers Unleashed II: The Science of Attracting What You Want by Olympia LePoint

Make six decisions to create the future that you want.

At the top of her Answers Unleashed ® speaking tour, TED speaker Olympia LePoint was flying to multiple cities and was reaching international success as a science entertainer and TV guest expert. Then at the doctor's office in 2019, she received the horrible news. She made six decisions that saved her life, then protected herself through a 2020 pandemic to heal. She used her NASA experience and faith to do it. Today, she writes a new book explaining the six decisions that can transform anyone’s future.

In Answers Unleashed II: The Science of Attracting What You Want, LePoint defines a new decision-making science called Quantum Deciding. You can jump into the future that you want, then come back and make the six decisions to get there. Foreword by retired NASA astronaut Robert Curbeam and endorsed by top professors and technology CEOs, this exciting-to-read textbook explains human decision-making with her miraculous story and a unique science of its own. With Albert Einstein's quantum entanglement brilliantly explained, the book introduces decision-making exercises, new mathematics, and the three time-versions-of-you who work together for your success. The book’s future thinking methods can unleash answers in personal goal setting, women’s leadership, diversity and inclusion training, STEM education, climate change reversal, university retention, NASA missions, and new quantum internet technology. Make decisions in a fearless way, so you can jump through time, withstand the test of time, and meet the successful YOU!

LePoint will virtually give a TED-like talk about her latest book, Answers Unleashed II, in a Distinguished Lecture Series at California State University Northridge this April 28, 2021.

LePoint has been seen on TED Talks, NBC News, the CW, CBS News reports, PBS, and Impact Theory. Currently, LePoint regularly appears on CBS News as a guest expert explaining NASA/SpaceX launches and writes as a science journalist on Thrive Global. In 2021, LePoint appears on the new AMAZON Prime TV show “PROOF” and explains contents from her books Mathaphobia, Answers Unleashed, and Answers Unleashed II: The Science of Attracting What You Want. Read more about her Answers Unleashed® science book series on AnswersUnleashed.com/books.

Olympia LePoint explains the energy in your decisions.