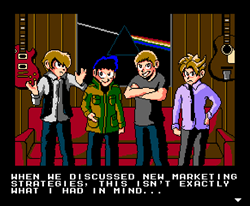 This game should stand as an enjoyable experience on its own, whether or not you know that we’re a real band or are a fan of our music.

Standing out as a new independent music artist in the modern world can be quite difficult. The internet is saturated with music while radio and television exposure is nearly unattainable unless you’re well-connected. Despite these challenges, independent “adventure rock” band Rocketboat is seeking out new ways to reach wider audiences and attract fans.

Released today by Present Day Media LLC, Rocketboat - Pilot is a mobile platforming adventure game for Android featuring a graphic style that mixes classic minimalist pixel art with modern 3D camera and rendering techniques. The game tells a humorous story with memorable characters while giving nods to nostalgic gaming and sci-fi clichés, conspiracy culture, the Illuminati, and even the hacktivist group Anonymous. Tying it all together is an 8-bit retro soundtrack influenced by the band’s music.

“Upon graduating high school, I began looking at Chicago schools that offered degrees in game design. My path was set, the wheels were in motion, and then something unexpected happened — I was seduced by rock and roll,” said Rocketboat bassist and lead developer Josh Hanchar. Rocketboat inspired me to finally give game development a real shot. We have this space fantasy lore and these different themes and tropes in our lyrics. It translates to a video game really well.”

“Games can be so much more than just entertainment. There’s a social awareness aspect that we’re trying to incorporate here as well,” said Leo Riveron, lead programmer.

“This game should stand as an enjoyable experience on its own, whether or not you know that we’re a real band or are a fan of our music. There is recorded material from our album that can be unlocked in the game’s jukebox by finding hidden music notes, but that aspect is secondary,” said Josh. “I’m hopeful that we’ll gain the resources to make more content if this catches on and there is enough demand.”

With the game’s Facebook page accumulating nearly 7k likes already, music fans and gamers alike are going to want to see what the Rocketboat hype is all about.