“Miraculous Survival after Dying Twice” from Christian Faith Publishing author Roger Rizzo is a brilliant reveal on one’s beliefs and principles about the existence of humanity, the universe, the earth, the Creator, free will, and many others. 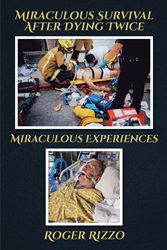 “Miraculous Survival after Dying Twice”: a compelling manuscript that dives into the principles and perspective of a man who has seen death twice. “Miraculous Survival after Dying Twice” is the creation of published author Roger Rizzo, a writer who has experienced death twice. Through his work, he wants to share to many what he has learned from his experiences and efforts.

Rizzo shares, “I obtained a Bachelor of Arts degree, a Master of Business Administration degree, and a juris doctorate degree. I was an extremely successful civil trial attorney for thirteen years and won several of the largest civil cases in the United States.

“I was in a horrendous motorcycle accident on June 30, 1995. I suffered severe traumatic brain injury, serious bloody abrasions and damage to the entire left side of my face, many broken bones, and injured internal organs. I was in a coma.

“I died a second time on September 20, 2019. My eyes were glazed in an upward direction. I vomited uncontrollably and suffered a grand mal seizure.

“In the twenty-five-year period between my two deaths, I considered and analyzed incessantly what was the Creator’s plan for humanity, the impact that the exercise of free will have on a human after life on earth, how people should treat others in a myriad of circumstances, and many other topics.

“It is my belief that I may have more intense feelings on these subjects after my two deaths and intense evaluations. My opinions are provided in this book.”

Published by Christian Faith Publishing, Roger Rizzo’s new book is a profound read written to share to everyone what he has believed in and learned after experiencing death twice and several more reemergence to life.

View a synopsis of “Miraculous Survival after Dying Twice” on YouTube.

For additional information or inquiries about “Miraculous Survival after Dying Twice,” contact the Christian Faith Publishing media department at 866-554-0919.