Rollerblade Sales Up More Than 300 Percent Since Beginning of March 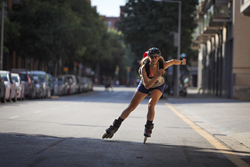 ... since the beginning of March things have really exploded ... with everything going on people need a mental break and some exercise, even a bit of fun.

With millions on lockdown and opportunities for exercise and recreation severely limited, interest in inline skating surged over the last three months as people across the globe sought ways to cope amid the COVID-19 pandemic.

The sales of pioneering inline skate company Rollerblade have increased more than 300 percent since the beginning of March, and in May the brand experienced its largest shipping month in the past 20 years in the strategically important United States market. Traffic to Rollerblade.com also grew exponentially as pandemic restrictions took hold, up more than 450 percent in April and May compared to the same period last year.

“Sales have been trending up moderately over the past few years but since the beginning of March things have really exploded,” said Jeremy Stonier, Rollerblade’s president and business unit manager. “We attribute that to the fact that with everything going on people need a mental break and some exercise, even a bit of fun. Inline skating provides all three and can easily be done close to home, while socially distanced and out in the fresh air.”

Fueling the growth in inline skating is a diverse cross-section of enthusiasts looking for different benefits from the same activity. Sales figures, Google Trends data and reports from retailers alike suggest that many hockey players and snow skiers who suddenly found themselves barred from rinks and ski resorts turned to inline skating, as did residents in warmer states seeking outdoor exercise in the face of widespread gym closures.

Former pro skater and current Rollerblade product marketing manager Tom Hyser has witnessed the surge himself while out on skates and in conversations with customers.

“It’s obvious that interest has exploded when you go to your local bike path,” said Hyser. “I just see more people skating than usual. And I’m hearing from a lot of customers who say they used to skate but have picked it back up again during the pandemic.”

Fortunately for Rollerblade, the company produced higher than normal stock heading into this spring because of a sales forecast that called for a modest rise in sales, so it was reasonably prepared to handle the unexpected surge of orders. The springtime emergence of COVID-19 also meant that increased consumer demand occurred when product inventories were at their highest levels of the year.

And while workplace safety measures meant its distribution centers in Italy and the United States were not operating at full capacity, the company adapted by adding a second shift to its U.S. distribution center in West Lebanon, N.H.

“We’ve been able to meet this wave of demand pretty well considering the unexpected nature of it and our commitment to making sure our employees were operating in as safe of an environment as possible,” stated Stonier. “We are in a good position moving forward as we’ve been able to work with our supply partners to reduce the normal production lead times so that our product restocking cycle will be faster than it’s ever been.”

While the short-term effect of renewed interest in inline skating has certainly been appreciated by Rollerblade, company officials hope reconnecting to past enthusiasts and being introduced to new ones fuels long-term growth for the sport.

“If anything, we hope the current situation reminds people just how great inline skating is and leads to a new wave of skaters,” said Hyser. “It’s so much fun to just get out and roll and it’s one of the best overall fitness activities out there.”

“For as little as $100 to $150, you can have unlimited access to this activity for years,” added Stonier. “No gym membership or other costs required. And with major cities around the world closing roads for activities like skating, access to safe, smooth pavement has never been better.”

Rollerblade® is an international leader in the inline skate industry and founder of one of the fastest growing sports, with more than 17.3 million participants worldwide. Headquartered globally in Giavera, Italy, and locally in the USA out of West Lebanon, N.H., Rollerblade is a top innovator in inline skates, accessories and gear with over 250 patented products. Today many athletes, fitness fanatics and thrill seekers enjoy the benefits of inline skating as it continues to grow as a lifestyle sport for all levels to experience. To learn more visit http://www.rollerblade.com.