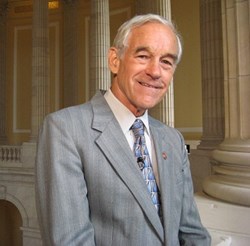 I would think people who are in it for the long term, it looks to me like this would be a very good time to buy [gold].

Birch Gold Group is pleased to announce the release of an exclusive interview with former United States congressman and presidential candidate Ron Paul.

Considered one of America's most influential political figures today and a leading voice for limited, constitutional government, Ron Paul spoke candidly with the precious metals company about current monetary policy in the U.S. In the interview, Congressman Paul predicts a major crash of the dollar due to an "unworkable" monetary policy of debt purchasing and Quantitative Easing, and he calls physical gold an "insurance" policy against the impending "dollar fiasco."

Further debt purchasing by the Federal Reserve, Congressman Paul says, will have disastrous consequences on the dollar. Yet, backing off the purchase of debt would also cause the financial markets to crash, he says.

"It's a system that is very friable and unworkable," Congressman Paul says. "And since [the Fed] will not work out of it gracefully and deliberately, we will probably go on to having a major crash of the dollar – that's what I see happening."

The situation is likely to deteriorate even further, Paul says, as Janet Yellen succeeds Ben Bernanke as the next chair of the Federal Reserve, maintaining the current policy of Quantitative Easing.

"She'll make [our problems] worse. She's inherited a mess, although she was a participant in the mess and she always argued for more inflation," Congressman Paul says. "The odds of her having the guts or the wisdom to start backing off the purchase of debt, it's slim to none … But the longer it lasts, the worse the correction will be when eventually people give up on our dollar and give up on our debt."

Birch Gold Group, a leading dealer of physical gold and precious metals IRAs, as well as silver, platinum and palladium, asked Congressman Paul for his thoughts on whether now is a good time to buy gold. Known as an advocate for physical gold, Congressman Paul believes prices will climb as the government prints more money and does nothing to change its current monetary policy.

"Instead of people arguing that [gold] is too 'expensive,' I would think people who are in it for the long term, it looks to me like this would be a very good time to buy," he says. "I look at gold as insurance, and others might be just at a time where they can start buying their insurance against the dollar fiasco, and I would say this is as good a time as any."

The full audio and transcript of Birch Gold Group's exclusive interview with Ron Paul can be found at BirchGold.com: http://www.birchgold.com/ron-paul-interview-gold-dollar-debt-fed/ .

About Birch Gold Group
Birch Gold Group, the Precious Metal IRA Specialists, is a leading dealer of physical gold and silver in the United States. The company helps people protect their hard-earned savings with investments in precious metals; clients do this by taking physical possession of the metals they purchase or by moving an existing IRA or 401(k) to an IRA backed by gold and silver. Birch Gold Group maintains a 5-star rating with Trustlink.org and is the only precious metals dealer that is a member of the Retirement Industry Trust Association (RITA). For press inquiries or more information on Birch Gold Group, please call (800) 355-2116.

About Ron Paul
Ron Paul is a bestselling author, physician and former politician who has served as the U.S. Representative for Texas's 14th and 22nd congressional districts. A U.S. presidential candidate in the 1988, 2008 and 2012 elections, Ron Paul remains an influential political figure and public speaker who publishes weekly content and commentary at http://www.RonPaulChannel.com.