“Acts, General Epistles, and Revelation in Clear English” from Christian Faith Publishing author Ron Banuk is a perspicacious account of Old and New Testament teachings that explain the foundation of Christian doctrines and the end-time prophecies. 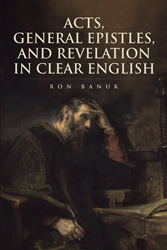 Banuk shares, “In clear English, using as much traditional biblical vocabulary as possible, and using between-the-verse notes where appropriate, the reader is able to discern the interaction in Acts among the Pharisees, Sadducees, scribes, Herodians, Romans, native Jews, Hellenistic Jews, and Hebrew Christians, both native and Hellenistic. Peter’s foundation and Paul’s four journeys for the kerygma of the Kingdom of God are made easy to understand.

“James with his exhortive Decalogue on worldliness is shown to be the best written book in the NT. Jude, Jesus’s other half-brother, also shows genius as an author. John the theologian couples love to keeping God’s commandments, while Peter, with authority, lays out the foundations of our faith.

“The multilevel metaphors of Revelation are explained in clear English. The story is shown to be the story of the Father and the Son with the power of the Holy Spirit interacting with four women: Jezebel, the wife of Yahweh, the Bride of Christ, and the Mother of Harlots. Notes reveal the reasons for and the timing of the Great Tribulation. The notes also discuss the timing of the Rapture and OT descriptions of the Antichrist.”

Published by Christian Faith Publishing, Ron Banuk’s new book strengthens the readers’ understanding of the Word of God that uplifts the soul and brings hearts toward His wisdom and eternal life.

Believers will be filled with resounding, truthful perspectives on the structure of the Christian faith that endows illumination and upholds devotion to God and His omnipotence.

View the synopsis of “Acts, General Epistles, and Revelation in Clear English” on YouTube.

Consumers can purchase “Acts, General Epistles, and Revelation in Clear English” at traditional brick-and-mortar bookstores or online at Amazon.com, Apple iTunes store, or Barnes and Noble.

For additional information or inquiries about “Acts, General Epistles, and Revelation in Clear English,” contact the Christian Faith Publishing media department at 866-554-0919.