“The Pittsburgh Hamlet” from Christian Faith Publishing author Ron Shafer is an arresting novel that follows the cunning minds of a couple pitted against a baneful polymath in a journey fraught with peril. 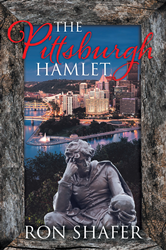 Shafer shares, “After Jude Hepler and his girlfriend Cory Mohney unwittingly stumble onto the zealously guarded secrets of the highly intelligent Abe Badoane (as narrated in the prequel ‘The Rose and the Serpent’), the enraged Abe vows revenge. To advance his scheme, he dupes fellow mine employee Duke Manningham into an attempted heart-stopping rape of the beautiful Cory and ultimately enlists Duke’s aid to rid the mushroom mine of Jude forever. To frame Jude, Abe lulls a stooge into sabotaging Duke’s gem ’57 Chevy. Upon seeing Jude’s fingerprints on his car, Duke errantly deduces that Jude is guilty and, to regain Cory’s favor, agrees to join Abe at a live production of ‘Hamlet’ in Pittsburgh. Brilliant and cunning as Hannibal Lecter, Abe Badoane smugly sits in the theater with the incriminating fingerprint evidence, but unbeknown to him, Jude and Cory have plotted a dangerous midperformance scheme to trap him.

“Who will win the battle between these towering intellects, wherein the compelling Cory and Jude story of love, faith, and gripping heroism runs parallel to—and actually intermeshes with—Shakespeare's masterpiece, ‘Hamlet’? Do Jude and Cory actually think they can take down the ingenious Abe Badoane during the live performance of the famous tragedy? Who will survive this epic white-knuckle clash?”

Published by Christian Faith Publishing, Ron Shafer’s new book shows how an overabundance of logic can cloud over emotions, corrupting the mind and heart and making a person devoid of empathy.

Readers will witness the unrelenting designs of a man as he antagonizes a couple due to selfish passion after they unveil his secret that proves to be dangerous at its worst.

View the synopsis of “The Pittsburgh Hamlet” on YouTube.

Consumers can purchase “The Pittsburgh Hamlet” at traditional brick-and-mortar bookstores or online at Amazon.com, Apple iTunes store, or Barnes and Noble.

For additional information or inquiries about “The Pittsburgh Hamlet,” contact the Christian Faith Publishing media department at 866-554-0919.