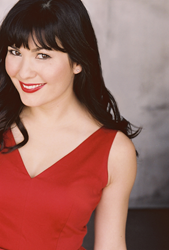 Comedy series Rosa’s Kitchen TV features Celeste Thorson (Heartbeat, How I Met Your Mother, The Exes) as Rosa Lee, a multi-ethnic graphic designer and home cook who whips up a successful online cooking channel while looking for love. The new media series will premiere a first-look video and giveaway contest on the official website and youtube channel on June 2nd, 2016.

Rosa portrays an aspirational, tech savvy, millennial with a dream of publishing her own cookbook to pass down her favorite recipes. The show has a strong emphasis on family, fun, and creativity through her unique views on food, lifestyle, humor, and love.

Rosa’s Kitchen's digital video programming is designed with interactive qualities to engage audiences with the online content, recipes, branded merchandise, product integration, giveaways, and holiday activities which are mixed into the series. Audiences will have the opportunity to follow her journey, meet her family, and buy exclusive branded merchandise along the way.

To connect with Rosa’s Kitchen TV via Facebook visit: http://www.facebook.com/rosaskitchentv

About Rosa’s Kitchen
Rosa's Kitchen TV is a new media web series about Rosa Lee, a home cook who creates a successful online cooking channel by sharing her favorite family recipes. Rosa manages to look for love while balancing a creative career and opinionated multi-generational family. Rosa’s Kitchen is a place where food and family mean everything but, when family doesn’t always get along, Rosa makes sure food always brings them together. Written by Celeste Thorson, filmed in Los Angeles, California, Rosa's Kitchen TV will debut online summer 2016.

About Celeste Thorson
Actress and screenwriter Celeste Thorson has written twenty-seven episodes of television, eight episodes of the comedy webseries Yogaphiles, and four short films. She has appeared in comedic television programs like CBS’ How I Met Your Mother, TV Land’s The Exes, and Heartbeat on NBC. She starred as the host of two seasons of a travel, adventure TV show airing in over 66 countries worldwide. As a digital influencer Celeste Thorson has amassed a following of over one million fans and over 15 million video views online via social media sites Facebook, Twitter, Instagram, Youtube, Snapchat, Vine, and Pinterest @CelesteThorson http://www.celestethorson.com