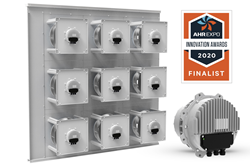 The ECFanGrid is a powerful air movement solution for mechanical contractors, architects, and energy management groups.

The ECFanGrid consists of a series of electronically commutated (EC) backward curved fans operating in parallel as a unit. It is a highly efficient, cost-effective alternative to single large belt-driven radial fans for air handling units.

Thanks to its modular design, the ECFanGrid can be assembled on site, whether in retrofit or new project applications. The ECFanGrid’s flat profile also creates up to 50% space savings.

ECFanGrid fan units can be joined in any quantity or arrangement – 1×3, 2×2, 2×3, 3×3 – multiplying the Gen 3 motor's increased power and providing virtually limitless application flexibility. All units within the grid work together, simplifying implementation of airflow, pressure or temperature controls.

The ECFanGrid is a powerful retrofit solution for mechanical contractors, architects, and energy management groups. While the entire assembly can be purchased from from Rosenberg, it's not the only way to deploy ECFanGrid technology.

Complete data on available Gen 3 backward curved fans and additional information on the ECFanGrid is available at http://www.rosenbergusa.com.