Nick Hall, a 74-year-old Rotarian, retired psychoneuroimmunologist and motivational speaker, has finished his fourth cross-country bicycle trip dipping his bicycle tire in the Pacific at Oceanside, CA. He’s been a self-described thrill seeker since childhood. Hall’s rides have all raised funds for Rotary International’s efforts to end polio in the world. 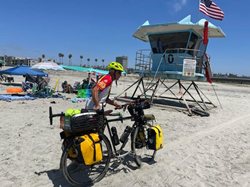 Nick Hall heading to the Pacific in San Diego for the traditional end-of-ride tire dip.

Nick Hall, a 74-year-old Rotarian, retired psychoneuroimmunologist and motivational speaker, has finished his fourth cross-country bicycle trip dipping his bicycle tire in the Pacific at Oceanside, CA. The Seattle to San Diego route along the Pacific Coast Highway and US 101 "boxed in the U.S." along the West Coast. Hall rode solo without a support van and was sponsored by Air Animal Pet Movers.

Hall’s rides have all raised funds for Rotary International’s efforts to end polio in the world. He’s been a self-described thrill seeker since childhood. In the 1960s, Hall wrestled alligators as a summer job in Black Hills, SD before pedaling his bicycle to Massachusetts for the fall semester.

Nick’s 2015 Pedal Power to End Polio Now excursion began in San Diego and ended in St. Augustine, FL. In 2018 Hall rode from Temple Terrace, FL to the Rotary International Convention in Toronto, Canada. The Seattle to Tampa ride in 2020 challenged Hall with mountain ranges and COVID shutdowns. Can you imagine pedaling all day in summer heat and finding restaurants, gas stations and parks closed? Together, the trips raised $50,400 to end polio.

"My goal this year is to get as many $10K donations as possible from individuals and Rotary clubs marking the fact that this trip will put me over the 10,000 mile mark since that first ride in 2015," Hall said.

Air Animal Pet Movers, owned by fellow Rotarian Walter M. Woolf, VMD, is the ride's major sponsor.“Nick’s tenacity and physical capabilities amaze and entertain at the same time as he’s helping Rotary reach our goal of a polio-free world. The world beat smallpox. We can win against polio by working together—especially with the worldwide COVID endemic,” Woolf said.

The lead $10,000 donation came from Thomas Dempsey and Alexis Dempsey Doyle. “Dr. Nick Hall inspires us all to push to our greatest and furthest extent! His commitment to ending polio now inspires our donation,” said Alexis. All donations to the ride through the 501(C)3 Rotary District 6890 Foundation will be sent to the Rotary International Foundation Polio Plus campaign.

The global pandemic shut down polio vaccination programs allowing wild polio virus to spread. From a low of 22 cases two countries in 2017 to 140 cases in 2020. Hall believes ending polio is within reach for all humankind. He vividly remembers polio epidemics of his youth when public pools were closed to prevent spreading the virus.

See our blog for links to “What the Polio Case in New York Tells Us About the End of Polio” by Arthur Allen, Kaiser Health News, July 29, 2022 and to donation information. Every donation will be matched by the Gates Foundation.