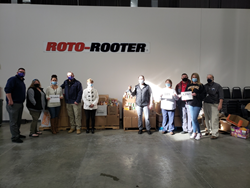 Our St. Louis team understands that it is more important than ever to support community food banks this year.

North America’s largest provider of plumbing and drain repair services, Roto-Rooter, is excited to announce the results of their second annual Giving Thanks Food Drive. Each year, Roto-Rooter’s branches and individual employees across the country compete to collect the greatest number of non-perishable goods to support community food banks and pet shelters.

The St. Louis branch as a whole performed 7th overall, based on the largest percentage of donations when weighed with their monthly job count. They collected 3,276 items, which also equated to the most in volume of any location in the company.

“It has been my pleasure to participate in this friendly and worthwhile competition. Our St. Louis team understands that it is more important than ever to support community food banks this year,” says Trahan. “While I am honored to receive top honors, first place should really go to our generous customers.”

Nationwide, Roto-Rooter’s Providence, RI branch and El Paso, TX contractor location collected the largest percentages of donations. Roto-Rooter’s corporate headquarters collected 2,013 items. Overall, Roto-Rooter’s efforts collected 52,630 food items, which is 9,000 more cans than last year. To put this in perspective, this equates to over 49,000 pounds or 24.5 tons of food. That is enough to feed more than 24 adults 3 full meals a day for an entire year.

Roto-Rooter was established in 1935 and is the largest provider of plumbing repair and sewer & drain cleaning services in North America. Roto-Rooter also provides water damage cleanup services in most of its locations. It operates businesses in 130 company-owned territories and approximately 400 franchise territories, serving approximately 91% of the U.S. population and 40% of the Canadian population. Roto-Rooter also has licensed master franchises in the republics of Indonesia and Singapore, and the Philippines. For more information about Roto-Rooter, please visit https://www.rotorooter.com/.