City Invites Developers to Submit Letters of Interest by June 16 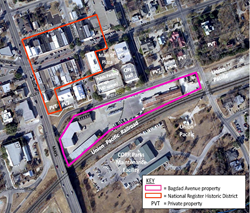 The vision of downtown as a vibrant destination is gaining momentum. The City has invested significantly in recent years in streetscape, utilities, parking, public plazas and property acquisition and will continue to do so with several pending projects.

Round Rock’s City Council has made the redevelopment of downtown one of its top priorities. The City has undergone several downtown planning initiatives recently. In 2010, the City adopted a Downtown Master Plan. The Plan’s stated vision is that “Downtown Round Rock can become a thriving town center, featuring a viable mix of residential, commercial, retail, dining, entertainment and public space uses, in a walkable and historically-sensitive environment to enhance Round Rock’s economy, quality of life, and sense of place.”

The vision of downtown as a vibrant destination is gaining momentum. The City has invested significantly over the past 10 years in streetscape improvements, upgrades to utilities, public parking, upgrades and construction of City facilities, public plazas and property acquisition and will continue to do so with several pending projects.

Recently, the City acquired a prominent piece of land downtown, known as the Bagdad Avenue Property. The site is approximately 3.68 acres. The City wishes to develop this land as a mixed use project that will complement the City’s vision for downtown and bring additional commercial activity, such as entertainment and dining venues, to the City’s core.

In order to gauge the level of interest in the development community for projects of this nature, the City is inviting developers to submit a Letter of Interest along with information about their firm and past experience with similar projects. For more information on this invitation, please visit the City’s website at: http://www.roundrocktexas.gov/bagdadproperty/. The website also includes supplemental materials related to this project.

Letters of interest are due to the City by June 16, 2014. The City anticipates responding to letters of interest by mid-summer. A detailed proposal and vision for the property will be requested from qualified developers, with approximately three (3) months given to submit responses. Selection and negotiation with a chosen developer will occur in late 2014. Any questions and requests for further information may be directed to Brad Wiseman, AICP, Director of Planning and Development Services at bwiseman(at)roundrocktexas(dot)gov or (512) 341-3321.