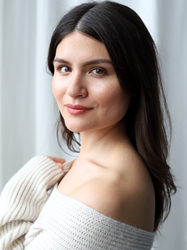 Rowan University’s College of Performing Arts is pleased to welcome Phillipa Soo, the Tony-nominated star of Broadway’s HAMILTON, for a special livestream performance on Friday, April 16, 2021, at 8:00 PM EST, headlining the 2021 Marie Rader Presenting Series season. She will be joined by her Musical Director and collaborator, Or Matias. The engagement will include an exclusive VIP Q&A opportunity and a Masterclass for Rowan students. A large portion of the ticket sales from the 8:00 PM performance will be passed on to the New Jersey Arts and Culture Recovery Fund, formed to provide relief to a sector devastated by the pandemic. Additional promotional support is being provided by arts advocacy partners at ArtPrideNJ. Tickets are on sale now.

Phillipa Soo is best known for originating the role of Eliza Schuyler Hamilton in Broadway’s critically acclaimed HAMILTON, garnering her numerous industry awards and a Tony Award nomination. She can currently be seen in the film version of Hamilton, on Disney+, and heard voicing a lead role in Netflix’s animated film OVER THE MOON. She can also be seen in Sony’s THE BROKEN HEARTS GALLERY and in Disney+’s THE ONE AND ONLY IVAN. She made her feature film debut in HERE AND NOW.

On the small screen, she will next be seen in Hulu’s upcoming drama series DOPESICK, based on the New York Times bestselling book of the same name by Beth Macy, and in Spectrum Originals’ upcoming series THE SECOND WAVE, opposite Audra McDonald, Taylor Schilling, and Steven Pasquale. She was previously a series regular on CBS's THE CODE and featured in NBC's SMASH.

Soo co-starred on Broadway in THE PARISIAN WOMAN, as well as playing the title role in the Broadway musical AMELIE. She also originated the role of ‘Natasha Rostova’ in NATASHA, PIERRE & THE GREAT COMET OF 1812. She is a graduate of the Juilliard School Drama Division.

“We are thrilled to welcome Phillipa for this special engagement, and humbled to be in a position to directly impact Arts Recovery throughout the state by donating 80% of the ticket revenue from this event,” said Debbie Shapiro, Director of Community Engagement and Presenting for the College of Performing Arts. “When we learned that the New Jersey Arts and Culture Recovery Fund was formed to support the most vulnerable during the pandemic and would be prioritizing BIPOC-led and -serving organizations and individual artists who have been hit hard in the last year, the decision was easy. We felt it was our responsibility, as an institution that could help, to step up.”

“The Marie Rader Presenting Series at Rowan enhances the cultural life of the campus community and beyond, and this engagement is no exception. In addition to the public performance that Rowan students can access free of charge, this is also a wonderful opportunity for our students to participate in a virtual Masterclass,” Shapiro continued. “Having a renowned, yet relatable, artist like Phillipa mentor our students is a valuable experience they will never forget.”

“Unfortunately, there are many theaters and theater artists right now that are struggling to survive,” Phillipa Soo said. “Among the many things we have learned this year, one is that we cannot take for granted the people and spaces that give us the opportunity to gather in a room, have a shared experience and go on a journey together, to find healing together. Without help, many of these theaters might close, so I am proud that proceeds from my Rowan performance will help support the New Jersey performing arts community.”

“We are so grateful to Rowan and Phillipa Soo for supporting the New Jersey Arts and Culture Recovery Fund. No one has been immune to the effects of the pandemic and seeing partners in the industry step up to help one another gives us hope for a stronger and brighter future – together. The support of Rowan will enable us to continue funding arts, cultural, and historical organizations and individuals in New Jersey who need it most,” said Sharnita C. Johnson, Co-Chair, NJACRF Steering Committee

ABOUT THE MARIE RADER PRESENTING SERIES
The Marie Rader Presenting Series at Rowan University brings exceptional artists to campus, enriching the university community and the Southern New Jersey region through expanded performing arts programming, bolstering a robust academic program in dance, music, and theatre. The series is made possible in part through generous support from the Henry M. Rowan Family Foundation, via the Marie F. Rader Memorial Fund. Programming is also made possible by funds from the New Jersey State Council on the Arts, a partner agency of the National Endowment for the Arts.

ABOUT THE NEW JERSEY ARTS AND CULTURE RECOVERY FUND
NJACRF was created by a coalition of New Jersey funders, aligned to ensure a coordinated approach to sector support with a commitment to best practices in grantmaking. NJACRF will provide financial support to catalyze an equitable statewide recovery and build cultural sector resilience. The Fund is hosted by the Princeton Area Community Foundation. http://www.njartsculture.org