Royal Flush Havanese shares tips with readers on why improper training can be disastrous for both small dogs and their owners. 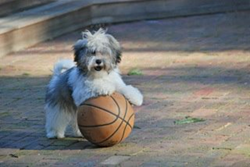 Jumping up in excitement, growling at others, invading personal space, pulling on the leash and general aggression are sometimes allowed to persist with smaller dogs, despite the knowledge that a larger breed of dog would immediately be corrected.

Anyone who has ever been to a dog park is familiar with this scene: a car pulls up, a large dog jumps out, and immediately, one (or several) of the small breeds already at the park begin endlessly barking and growling. The owners laugh–their dog’s behavior is harmless due to their small size. This canine behavior is known as Small Dog Syndrome, and is becoming increasingly more tolerated by dog owners. Royal Flush Havanese shares tips with readers about why this behavior should never be allowed.

In today’s society, small dog breeds are overwhelmingly labeled as yappy, protective, and jealous. Although this is sometimes true of specific dogs, many small dog breeds–including the Havanese–were bred specifically as companion animals. Havanese, in particular, are not prone to exhibiting Small Dog Syndrome, as they are a confident and hardy breed. These negative behavioral adaptations are a result of poor training, not poor breeding.

Why exactly is Small Dog Syndrome a problem? Take the aforementioned dog park scenario, and replace the small dogs with a Doberman Pinscher. Almost any dog owner would feel unsafe entering a dog park with such a large dog growling and barking. Now the problem with “yappy” dogs becomes apparent. This double standard in dog behavior is unsafe for all small dogs, their owners, and anyone they come into contact with.

These behavioral double standards extend much farther than simply barking. Jumping up in excitement, growling at others, invading personal space, pulling on the leash and general aggression are sometimes allowed to persist with smaller dogs, despite the knowledge that a larger breed of dog would immediately be corrected. Although most small dogs owners see this behavior as cute, they are allowing their dog to display aggressive, dangerous, and dominant behavior. Owners, as the leader of the dog pack, need to appropriately reprimand their dogs, and do so in a way that the dog realizes that their behavior is improper. This is generally best to start when the dog is a puppy, but behavioral training is always better late than never.

To correct a dog that is exhibiting improper behavior and to establish the alpha role, understand that dogs rely on body language cues and tone much more than humans do. Simply acting like the alpha leader and requiring a dog to sit before receiving any reward or attention can help to establish dominance. Although this may seem to be against a loving owner’s intuition, a dog that knows his place within his family will be much more comfortable knowing he doesn’t have to make his own decisions all of the time. Additionally, it is important to always correct a dog, and never punish. It is only possible to teach a dog not to do something if he/she is corrected while he/she is in the process of doing it. Always think like a dog, not a human, when trying to correct a canine.

Royal Flush Havanese hopes that the information conveyed in this article will help increase awareness of the dangers of Small Dog Syndrome and help to better the relationship between dogs and their owners. Visit the Royal Flush Havanese website to read more useful tips for the health and well being of your dog. Awarded a Certificate of No Complaints and rated A+ for their outstanding dedication to honesty in the business place, customer satisfaction, and ethical policies and procedures by the Better Business Bureau, Royal Flush Havanese is dedicated to producing the finest Havanese puppies and providing outstanding service in their care. The only dog-breeder in Rhode Island to be accredited by the BBB, Royal Flush Havanese continually receives outstanding reviews from their many delighted clients. Royal Flush Havanese is proud of their commitment to excellence and has thousands of admiring fans and followers on their Facebook page.