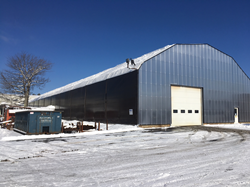 Rubb Building Systems of Sanford, Maine and Shift Energy of Biddeford, Maine recently partnered on a solar energy project at the Rubb facility (pictured). The fabric cladding on the south facing gable wall was replaced with a 4" air plenum standing seam Polycarbonate glazing system which harvests solar heat in the form of hot air generated by the sun. The solar heat, which delivers over 8,000cfm of air volume at +100ºF, is distributed evenly throughout the 14,500 sq ft building via a fabric ductwork system. The system can be incorporated into a new structure or easily retro-fitted on to an existing Rubb building.

Combined with the highly efficient Rubb Thermohall insulation system, the overall result is an employee-friendly warm environment, significant energy savings and a forward thinking green solution. The overall solution in partnership with Shift Energy is achieving an estimated 5-year payback against natural gas, due also in part to the efficiency of circulating trapped air and storing heat using thermal mass. This is the unique part of the Rubb/Shift solution. The estimated payback does not consider any tax or governmental incentives, which can be significant.

Winters in southern Maine are frigidly cold and snowy, yet a few weeks after installation of the solar wall on Rubb's Old Steel Shop, long-time Rubb employee Nate Bedell could be heard saying, "It's too warm in here!, we need to open the door." It was a sunny, early March morning with sub-freezing temperatures outside, however it was a balmy 75F(24C) inside the 80' x 180 Rubb Thermohall insulated structure...and the heating system was not on! The solar harvesting system has been automated into a thermostat "microcontroller" system which detects the amount of energy(heat) being generated by the solar wall and adjusts the building's mechanical system accordingly. Performance data has been gathered hourly on the system, helping track the benefits of the Solar Harvesting system and the overall holistic building solution. Early results show the combination of Shift’s solar heat + Rubb’s high performance envelope is achieving very close to NetZero heating in a frigid climate!

In support of Rubb’s innovation, Efficiency Maine’s Commercial & Industrial Incentive program also helped make the project possible, awarding Rubb with funding for a portion of the project. The results helped shrink Rubb's payback by a further 2 years, while supporting Rubb’s efforts for going “above and beyond” to achieve significant energy reductions.

Shift Energy specializes in transforming conventional solar facing wall systems into impressive commercial and industrial solar air heating systems across the USA and beyond. The systems qualify for Federal and some State incentives, which in many cases extends to the building’s HVAC & control elements. Contact Shift at http://www.shiftnrg.com.

At Rubb, we never stop innovating. We are always looking to improve our structures and how they perform. From our industry leading hangars to highly efficient climate controlled Thermohall buildings... Can you afford not to have a Rubb?

Rubb buildings are noted for their quality components, flexibility in design, energy efficiencies, and quick construction. With little or no maintenance, Rubb is the industry leader in cost effective storage solutions.