Rue Doolin’s New Book “The Coverup” is a Gripping and Potent Murder Mystery Revealing a Criminal Underworld of Drugs, Extortion, and Murder-for-hire in a Nevada Town 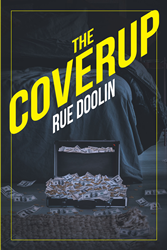 Rue Doolin has completed her book “The Coverup”: a compelling drama detailing the fierce will of a woman victimized by her addicted, abusive husband and conflicted by her relentless determination to bring a killer to justice, while knowing that in doing so, she could be implicating her own son in a criminal act.

When informed that the bodies of her soon-to-be-ex-husband, Greg, and his longtime friend Mape, have been discovered at a bizarre crime scene that morning, Capri (Pree) Olindo struggles to find a measure of sympathy for the dead men but finds only relief. Greg’s gradual addiction to prescription drugs over the course of their six-year marriage had transformed her once-loving husband into an abusive stranger.

Months before, Pree had inadvertently discovered documents showing that Greg, with Mape’s assistance, was in the process of transferring her personal assets into his name and was planning to divorce her, leaving her nearly penniless. Shocked and heartsick, Pree was able to stop the men from carrying out their plan, an action that so infuriated Greg that he paid an undercover Bullhead City Police Detective to murder her and burn down their beautiful home.

The deaths of the men are ultimately ruled an apparent murder/suicide, although Pree has compelling evidence they were murdered by a third party. Pree is reluctant to turn the evidence over to the police because some of it indicates that her son Jimmy could be the killer. Certain that Jimmy is incapable of murder, Pree sets out to establish her son’s innocence before involving the authorities. Her relentless pursuit of the truth leads Pree into a world of blackmail, insurance fraud, identity theft, larceny, murder-for-hire, and an enormous quantity of unexplained cash, which forces her to distance herself from loved ones, lie to her friends, and eventually to begin questioning her long-held beliefs regarding right and wrong, lawful and justified.

Published by New York City-based Page Publishing, Rue Doolin’s book is a fast-paced and suspenseful murder mystery that keeps the pages turning until the last chapter.

Readers who wish to experience this engrossing work can purchase “The Coverup” at bookstores everywhere, or online at the Apple iTunes store, Amazon, Google Play, or Barnes and Noble.