Russell Clarke’s newly released “A Change of Season: A Novel” is a gripping book about human relationships and associations in a world of opposing ideologies.

“A Change of Season: A Novel” from Christian Faith Publishing author Russell Clarke shares the brilliant adventure of four individuals whose lives are intertwined after an incident that majorly changes the course of their whole lifetimes. 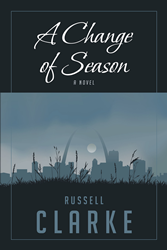 “A Change of Season: A Novel”: a riveting tale of four different men whose lives cross after a confrontation that leaves one dead and the others alive, yet facing the inevitable aftermath of this event. “A Change of Season: A Novel” is the creation of published author Russell Clarke, a writer who has worked for over thirty years in the education field. His written works typically examine the human condition, particularly as it relates to human relationships and the connections that people make.

Clarke shares, “On March 26, 1982, two men in a mysterious black pick-up truck brutally attack two bikers on the deserted bluff roads just across the Mississippi River from downtown St. Louis. One biker is killed instantly and the other is severely injured, and the lives of the four men are indelibly changed and linked together, forever.

“A Change of Season accounts the final days of each of the men involved in this tragic confrontation and examines the philosophical and existential impact that such an immeasurable event had on each of their lives.

“Craig Lerrib, the main antagonist, leads a life of unexamined indifference and unending carnal exploration and ends up morally bankrupt and alone, a reality that permanently alters all those who are caught in the dangerous pull of his orbit.

“His partner in the black truck, Peter Doyle, a thoughtful man swept along by his desires, spends his life suppressing the guilt he feels for his part in the murder, as well as his own true sexual feelings, a process that leads to great existential searching and self-awareness, but also unrelenting loneliness and life-long isolation.

“Alfred Whitman, the surviving rider, is never quite able to get past the physical impairments sustained in the attack, and he attempts to authenticate in the sterile world of pen and paper what was lost in the physical world of living, a corridor that leads to existential angst and unresolved religious questioning.

“And in one last tribute, Alfred Whitman pens a short story in homage to the enigmatic young rider who lost his life that day, Thale, who, although dying at an early age, becomes the true protagonist of the novel and represents the possibility of forgiveness and reconciliation that the other characters are lacking.

“In a larger sense, A Change of Season examines the relationships and associations that we make as humans through the restricted prism of our own beliefs, and then explores how these ‘connections’ struggle for survival in a world of endless opposing ideologies. A philosophical process of discovery as mysterious, and in some ways, as unknowable as the very setting of it all, the Mississippi River.”

Published by Christian Faith Publishing, Russell Clarke’s new book is an excellent exploration that shows what happens when lives carrying different beliefs and ideologies clash together. It is, without doubt, interesting for readers of all ages.
View a synopsis of “A Change of Season: A Novel” on YouTube.

Consumers can purchase “A Change of Season: A Novel” at traditional brick & mortar bookstores, or online at Amazon.com, Apple iTunes store, or Barnes and Noble.

For additional information or inquiries about “A Change of Season: A Novel,” contact the Christian Faith Publishing media department at 866-554-0919.