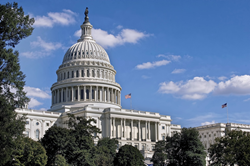 S1010 makes the Register of Copyrights, who leads the USCO, a presidentially-appointed, Senate-confirmed position

Professional Photographers of America (PPA) is urging the U.S. Senate to pass S1010, the Register of Copyrights Selection and Accountability Act, an important step in the association's ongoing call for lawmakers to modernize the U.S. copyright system. PPA has been activating its 30,000-member base to call or email their representatives in support of the bill.

H.R. 1695, the House version of the bill, sailed through with convincing bipartisan support. The vote count was 378 to 48. S1010 makes the Register of Copyrights, who leads the United States Copyright Office (USCO), a presidentially-appointed, Senate-confirmed position, a stature commensurate with the economic sector to which the duties of the Office are so critical.

The USCO, which resides in the Library of Congress, maintains copyright registration and recordation databases upon which creators, licensees, users and consumers depend, but which have become outdated. Indeed, despite repeated calls by former Registers for reform, the USCO has been unable to modernize because it lacks the autonomy to do so. The Office’s efforts have been frustrated as it is housed within the Library of Congress where it competes with many other Library priorities for resources, technology and staff. The Register of Copyrights Selection and Accountability Act would give the Register the autonomy to modernize the USCO to suit the specialized needs of the copyright system.

Historically, that USCO has a policy mission to act as an impartial resource to Congress, providing counsel on copyright law and policy. This is particularly important for artists and small businesses, for without the USCO, Congress might not hear the plight of creators, like photographers, on critical issues such as how to handle copyright infringement claims too small to justify the expense of undertaking a federal law suit. This is a key issue for PPA, whose goal is the eventual creation of a “small-claims process” to remedy copyright infringements. "Photographers and other visual artists have always been treated inequitably under the current copyright system,” explains PPA CEO David Trust. “Passing a small claims bill is our number one priority on The Hill. The creation of a small claims process would transform the copyright landscape for every professional photographer across America."

"So much effort went into this," said Trust upon passage in the House, "So, today is a day for smiles and congratulations. Tomorrow we start preparing for a much tougher fight in the Senate.” S1010 currently awaits decision on which Senate Committee will take it up. Currently vying for that position are the Rules Committee and the Judiciary Committee. PPA will continue to pressure lawmakers across the country to represent the voice of small business and visual artists in the fight for stronger copyright protections.