S. Kuhl’s newly released “Unworthy: A Polemic Against the Secret Second Coming” is a compelling analysis that looks into the rapture from the Bible perspective

“Unworthy: A Polemic Against the Secret Second Coming” from Christian Faith Publishing author S. Kuhl is an insightful take on the pretribulation rapture, the second coming, and the condition of today’s world. 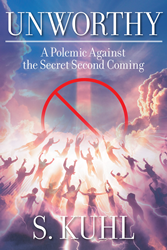 Kuhl shares, “Finally, this is not just another book denouncing the pretribulation rapture, but a Bible-based analysis and polemic against the very idea of man trying to avoid pain and tribulation. While it is true that the Bible teaches that we (Christians) are not to suffer wrath. The Bible also teaches that as Christians, we should expect trials and tribulation.

“Daniel’s prophecy of seventy weeks, the final week man’s rule is divided in half, creating two periods of three-and-a-half years. The final three-and-a-half years of man’s rule on earth will be the time known as Jacob’s trouble. Evil will no longer be restrained; that is the Holy Spirit will cease to hold back evil, allowing ungodly men to rejoice in the darkness they have wanted, since the beginning. Christians will have disappeared from the earth by this time, and men can and will run wild. Earthly government will be a single one-world government ruled by an insane fascist leader, who will not care what women want but only care that the world worships him as God. The people will celebrate when last two righteous men in Jerusalem are killed by Satan and send gifts to each other. Christians should rejoice that they will not be here, but they will see the rise of the Antichrist and recognize him when he appears with his false prophet.

“The stage for this play is being set as we watch today’s headlines. Unworthy will show you that we are today living in what Jesus called the ‘beginning of sorrows. (Matt. 24:8)’”

Published by Christian Faith Publishing, S. Kuhl’s new book is a stirring work that will open the reader’s mind and give them a polemic against the secret second coming grounded on a different perspective and the writings of the Bible.

View a synopsis of “Unworthy: A Polemic Against the Secret Second Coming” on YouTube.

Consumers can purchase “Unworthy: A Polemic Against the Secret Second Coming” at traditional brick & mortar bookstores, or online at Amazon.com, Apple iTunes store, or Barnes and Noble.

For additional information or inquiries about “Unworthy: A Polemic Against the Secret Second Coming,” contact the Christian Faith Publishing media department at 866-554-0919.