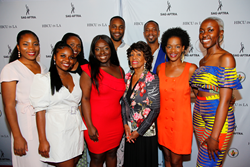 Hon. Maxine Waters with Cast and Mentors of Uchawi Film

The 10-minute short-film project centers around two sisters who encounter an extraordinary power that forces them to confront their troubled pasts and learn the importance of forgiveness. It was created, written, produced, edited, and then showcased entirely by student interns, with the support of volunteer industry professionals from James Bland Films, SAG-AFTRA, IATSE, Endeavor Content, Revolt TV, Jesse Collins Entertainment and TV One, among others. Uchawi was written by Troi Henderson, a recent TV & Film graduate of Howard University, whose pitch was chosen from 5 finalists.

The premiere of the short film was presented to a packed house at the SAG-AFTRA headquarters in Los Angeles. Guest speaker Congresswoman Waters was introduced by SAG-AFTRA Chief People Officer, Tashia Mallette. Rep. Waters discussed the important function of HBCUs, offered words of wisdom, and encouraged students to pursue their dreams. She left the aspiring entertainment professionals with a word of advice which was met with roaring applause and a standing ovation, “Listen to your Auntie and reclaim your time!”