“Doubting Tommy” from Christian Faith Publishing author Sage Kennedy is a sincere story of one young man’s journey through the loss of his father and finding his place in a new community. 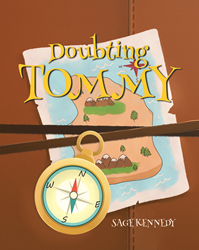 Sage writes, “Tommy is thrust into a change in life that he did not want, with people he barely knows. He learns who he is through trials that take him through dangerous times with bullies and adventures through the wooded areas close to his house. Along with some close friends and newfound family members, Tommy helps his friends learn their capabilities by trusting in each other and learning to trust that God has everything under control. The meaning of family is tested in some of his adventures.

Sometimes, when we go through what life sends our way, we also learn what we are made of. School is very difficult for some people, and it is hard to find their own meaning of life. Tommy is in the sixth grade at a new school because of a major loss. He is a loner until he meets someone that helps him break out of his shell. Through this friend, he meets some of the most important people in his life so far. Tommy has never had a best friend who he can talk to until now. He is able to open up and learn from a friend whom he thinks God sent to him.

Follow Tommy as he goes through the struggles and triumphs of the sixth grade, the excitement of learning how to use his imagination to get through some tough days, and how he fights some depressing days. We all know what we would like to go back and change from our days of past; for Tommy, we see what he goes through that may help some of the choices we make. Learn how to fight against bullying, how to believe in yourself, and how to be loyal to the people who really care about you.”

Published by Christian Faith Publishing, Sage Kennedy’s new book is an enjoyable, albeit emotional, tale of a difficult time in most people’s lives coupled with the loss of a parent.

When Tommy loses his father and ends up moving in with his grandmother, he has no idea what is in store for him along the way. Read along as Tommy learns to cope with his loss in this charming coming of age tale.

For additional information or inquiries about “Doubting Tommy”, contact the Christian Faith Publishing media department at 866-554-0919.