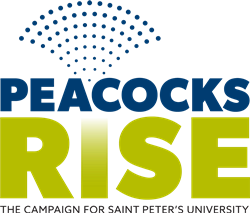 “We are really well positioned as a community to not only meet, but exceed our $75 million goal,” said Eugene J. Cornacchia, Ph.D., president of Saint Peter's University. “In March our men’s basketball team showed the world what Peacocks are made of. When Peacocks Rise, there is no stopping us."

“Peacocks Rise is our opportunity to achieve lasting greatness,” said Eugene J. Cornacchia, Ph.D., president of Saint Peter’s University. “During the quiet phase of this campaign our academic programs have grown in stature and size, our campus has experienced a physical transformation to meet the excellence of our offerings and future ambitions while our pride and national recognition have never been greater. We could not have done this without our valued supporters, but the work is not done and we are not done rising.”

President Cornacchia made the formal announcement of the public phase launch at an exclusive Blue and White Ball kick-off event for donors and friends of the University on December 2. The Peacocks Rise campaign has already raised $70 million during the quiet phase, which began six years ago. Fundraising to date has already broken the record-setting amount secured in the last campaign, Students at the Center, which concluded in December 2014 having achieved a total of $64.2 million.

“We are really well positioned as a community to not only meet, but exceed our $75 million goal,” said President Cornacchia at the event. “In March our men’s basketball team showed the world what Peacocks are made of. When Peacocks Rise, there is no stopping us. I am challenging our community to raise the bar as high as we can for Saint Peter’s because we need to do the most we can for our students.”

Since the silent phase began, the University has seen record-breaking philanthropy. Notable gifts include $10 million commitments from former U.S. Congressman Frank J. Guarini H ’94 and Joseph A. Panepinto Esq. ’66 (the two largest gifts in University history), a landmark $5 million gift from Thomas P. Mac Mahon ’68 and six commitments at the $1 million level. More than 450 donors have made gifts of $10,000 or more. And of the nearly 8,000 donors from across the country who have made gifts since the campaign began, almost half of them made their first gift ever.

“The public phase of Peacocks Rise is an invitation for all alumni, friends and members of the Saint Peter’s community to be a part of this historic moment,” said Leah Leto, M.Ed. ’05, vice president for advancement and external affairs. “Community-wide participation is vital. Everyone and every gift can make a meaningful difference in the lives of students and the future of Saint Peter’s University.”