The “Little Schools” provide education and support to primary school children who might not otherwise have access to education. 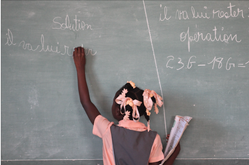 “Many of our Salesian students in Haiti come to class on an empty stomach because there is little food in the homes where they live,” said Father Gus Baek, director of Salesian Missions.

In the distressed Port-au-Prince slums of La Saline and Cité Soleil, where most parents do not have the means to properly care for their children, Salesian missionaries operate a network of 192 primary schools known as OPEPB or the Little Schools of Fr. Bohnen, after its founder.

Since 1954, the Little Schools have provided an education and nutritious meals to children in poverty. Father Bohnen, a Dutch native, was assigned as head of the St. John Bosco elementary school in La Saline, where he encouraged local school teachers to form “little schools” for the children. His goal was to teach the children how to read, a first step in educating them. He also invited the children attending these “little schools” to come to the St. John Bosco cafeteria where they would receive a hot lunch. He further supported the schools by providing training and salary incentives for the teachers and a curriculum for all the schools.

Some of the Little Schools are located on the Salesian-run National Academy of Arts (ENAM) campus, where nearly every building collapsed during the devastating Jan. 12, 2010 earthquake. At the time of the quake, classes were still in session and just minutes away from dismissal. Hundreds of students on the campus were killed—many of the older students were studying to become teachers.

After Salesian missionaries sprung to action during the emergency response and relief efforts, with their networks critical during the aftermath, students returned to school at 60 of the Little Schools in October 2012. At first, the classrooms were under trees or makeshift tents. Today, all 192 schools are back in operation and have resumed activities, educating more than 17,000 students. Many of the schools’ physical structures still need to be rebuilt.

From 2017 to 2019, Salesian Missions, the U.S. development arm of the Salesians of Don Bosco, received a grant from the U.S. Agency for International Development (USAID) for its Hunger for Education USAID International Food Relief Partnership project in Haiti. The project increased the health and learning capacity of students by implementing school feeding programs in five Salesian centers in Haiti. The OPEPB Little Schools in Port-au-Prince was one of the recipients

Fr. Bohnen knew that children could not focus on their studies on an empty stomach. The OPEPB has one the largest free cafeterias in the world equipped with two huge kitchens, two large dining halls and a recently added bakery to help meet the need for bread. As part of the Hunger for Education project, 8,620 students received daily lunch from the two main cafeterias.

“Many of our Salesian students in Haiti come to class on an empty stomach because there is little food in the homes where they live,” said Father Gus Baek, director of Salesian Missions. “With Salesian feeding programs, children who once arrived at school hungry and had to struggle through classes without food are now provided with a meal during the day. As a result, students have shown improvements in health, happiness and capacity to learn.”

Despite the ongoing reconstruction and infrastructure improvements that are helping to rebuild Haiti, the country remains the poorest country in the Americas and one of the poorest in the world. Three-quarters of the population lives on less than $2 a day and faces the highest levels of severe food insecurity in the world, according to the World Food Programme. More than half of the country’s population of 10.7 million people are undernourished. Nearly 100,000 Haitian children under the age of 5 suffer from acute malnutrition, causing irreversible stunted growth for close to 30 percent of all children in the country.

For Salesian missionaries in Haiti, schools and youth programs fulfill an important socio-economic mission by providing poor youth a foundation for lifelong learning through education and training in skills and trades to help them escape poverty and establish a sustainable livelihood.