Sally I. Nwogu’s newly released “More Than a Conqueror” is a comforting companion in one’s personal walk to the Lord

“More Than a Conqueror” from Christian Faith Publishing author Sally I. Nwogu is a gentle reminder that comforts believers and inspires them with hope that in the end of life’s battles, Christ and His angels await us. 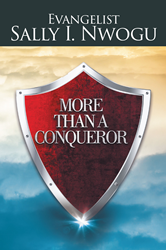 “More Than a Conqueror”: a captivating read that reminds everyone of Christ’s great power and His endless blessings over every believer’s life. “More Than a Conqueror” is the creation of published author Sally I. Nwogu, a called and ordained servant of God who has sown her entire life in prayer and service to God.

Nwogu shares, “Who is a conqueror? A conqueror is one who had victory over an adversary. Being more than a conqueror is to gain a surpassing victory. (More than being victorious!) Achieving greater than imagined, it means you have not only achieved victory over your adversary, but you are overwhelmingly victorious. To say we are more than a conqueror reveals that we cannot explain it, but we can experience it when we overcome in a given uphill situation, or battle of life.

“A conqueror is one who knows for sure he got a battle to fight, and recognizes that there is a helper, (somebody) inside of him that is greater than the battle itself, (Jesus) and gives the battle over to him, and victory is obtained.”

Published by Christian Faith Publishing, Sally I. Nwogu’s new book is a wonderful piece of literature that is written for those who are struggling in their own problems and afflictions that they tend to think that they are forgotten by the Lord. Here, everyone will realize that throughout these troubles, there is Christ at the end of the dark tunnel.

View a synopsis of “More Than a Conqueror” on YouTube.

Consumers can purchase “More Than a Conqueror” at traditional brick & mortar bookstores, or online at Amazon.com, Apple iTunes store, or Barnes and Noble.
For additional information or inquiries about “More Than a Conqueror,” contact the Christian Faith Publishing media department at 866-554-0919.