Law Bulletin Media announced the 2020 Forty Under 40 class during a virtual happy hour on September 24, 2020. 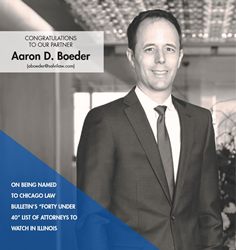 I am truly honored to be part of this special group, and so grateful for the support I received from numerous attorneys who wrote recommendations on my behalf.

Salvi, Schostok & Pritchard, P.C. is pleased to announce Partner Aaron D. Boeder has been named one of Law Bulletin Media’s Forty Lawyers Under 40 to watch in the state of Illinois for 2020. This year’s Forty Under 40 honorees were selected from a group of nearly 1,000 nominations.

Aaron D. Boeder joined Salvi, Schostok & Pritchard P.C. in 2010 and was named Partner in 2019. He focuses his practice in the areas of medical malpractice, catastrophic injury and wrongful death law.

During his time with the firm, Mr. Boeder has helped secure a number of noteworthy verdicts and settlements for his clients, including an $11.25 million jury verdict on behalf of a young boy whose mother was killed in a motor vehicle collision and a $15.2 million jury verdict for a client who was struck by a forklift at McCormick Place Convention Center. The case was appealed by defense counsel and subsequently settled for $19.5 million, including interest accrued during the appeal process.

In recognition of his outstanding legal work, Mr. Boeder was honored in the 2021 Edition of Best Lawyers: Ones to Watch. In addition, Mr. Boeder has been named a Rising Star by Illinois Super Lawyers and an Emerging Lawyer by Law Bulletin Media every year since 2015.

Mr. Boeder served as an officer in the Army National Guard before he attended law school.

“Over the past 10 years, Aaron has developed into an excellent personal injury attorney working on many large high-profile cases,” Salvi, Schostok & Pritchard Founder and Managing Equity Partner Patrick A. Salvi Sr. said.

“I am truly honored to be part of this special group, and so grateful for the support I received from numerous attorneys who wrote recommendations on my behalf,” Aaron D. Boeder said.