Recent release “A Nation in Crises” from Page Publishing author Samuel G. Obeng is a compelling account that reveals the vicious differences between political actors’ idealism and what is best for the people of the United States of America. 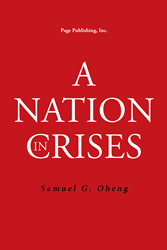 Samuel G. Obeng, a tenured professor of Linguistics, has completed his new book “A Nation in Crises”: a gripping and potent collection of pieces that revolve around subjects such as social issues, people relations, gun laws, wars, domestic and foreign policies, and many other pressing issues.

Samuel writes, “In a crises-ridden society such as ours, politicians in leadership positions are mostly honest, but the disregard for truth and neglect of the needs of the citizenry create pain, anger, and apathy. Political inexpediency results in policies that hurt minorities and the poor and also leads to useless and ill-planned expensive wars that cost human life and emotional distress. Our political actors’ ill-conceived policies and ideologies often create chaos here at home and overseas and pitch different races and sociopolitical groups against each other. In recent times, lying, bullying, and reckless talk by political actors in leadership positions against each other and against journalists and political commentators have characterized our fight against pandemics and our overall health-care system, resulting in untold death and dying. Never in our country’s history have the two ideological poles—left-wing socialism and ultranationalist right-wing—taken a stranglehold on our polity, creating depravity, political corruption, and shameless sycophancy. Our actions have led to the creation of an emperor who kills dissent, disrespects women, mutes voices that dare reason, and induces cognitive and emotional tumultuous discordance in the minds of most citizens, including even the sycophantic chorus that sings to hail the emperor.

However, all is not lost. The United States’ exceptionalism projects inner strength that liberates the soul of the nation. Ordinary Americans have always found ways to come together, seek and found liberty, and prospered like no other nation. Patriotism, selflessness, and goodwill are deeply imbued in the fabric of our society such that no matter what the crisis is, we see the proverbial light at the end of the tunnel and therefore persevere.”

Readers who wish to experience this work can purchase “A Nation in Crises” at bookstores everywhere or online at the Apple iTunes store, Amazon, Google Play, or Barnes and Noble.