Bemus Landscape, Inc is featured as the contractor spotlight in The Local Dish Magazine for February 2021. 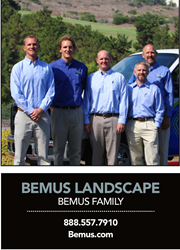 Bemus Landscape was founded in 1973 by Bill Bemus. He needed to earn money while attending classes at Orange Coast College, so in a ’62 Dodge pickup, he started pedaling gardening services and began mowing lawns, raking leaves, shearing hedges, and pruning trees.

Shortly after founding the company, Bill married his high school sweetheart, Martine. He was 20; she was 19, and life was good. In short time, the one-man gardening show grew into a full-service landscape company. He continued to pursue his education, transferred to Cal Poly Pomona and qualified for a C-27 Contractor’s License. He wasn’t a gardener anymore; he was a landscape contractor, with a license to prove it.

Soon there were two more mouths to feed (Colin and Corin) and Bill decided to forego his degree and dedicate himself to running the company. That was a good decision, because the kids kept coming and soon Claire and Spencer were demanding to be fed as well. Most of the company’s work involved designing and building landscape installations for private homeowners from San Clemente to Newport Beach. As the business flourished, Jon Parry, Martine’s brother, joined the company as its General Manager. While Jon handled the office and administration, Bill focused on securing and implementing new projects.

Since then, Bemus Landscape has grown to over 450 employees and five locations, spread across three counties. The company has shifted its efforts from residential service to commercial landscape maintenance projects for most of Orange County’s premier HOAs, homebuilders, and developers. A few residential estates remain as clients.

In addition to delivering excellent landscape service to its customers, Bemus Landscape is also focused on supporting the five communities it serves. “We support the local Boys and Girls Club in each of the locations where we operate. By giving back to these local charities, we want our employees to see that the contribution they are making to the success of our company, is making an impact in their community,” says Corin Bemus.

In addition to charitable contributions, Bemus Landscape supports the community by providing employment programs for careers in the landscape industry. “We offer a 13-week program where people, with little to no landscape experience, can learn our trade and take the first step toward a career in landscape maintenance,” adds Corin.

Currently, the Bemus family continues to run the company day-to-day with Bill (Chairman of the Board), Corin (CEO), Colin (President), Jon (General Manager), and Spencer (VP of Tree Care).