The Rady Shell at Jacobs Park, Managed by the San Diego Symphony, is the First Permanent, Year-Round Bayside Concert Venue in the Nation Operated by a Symphony Orchestra; The Inaugural Season Launches August 6 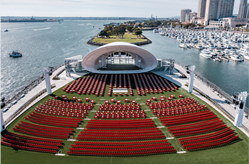 The Rady Shell at Jacobs Park

San Diego, CA — The San Diego Symphony today announced its inaugural season of concerts at The Rady Shell at Jacobs Park, the spectacular new year-round outdoor venue with 360-degree views of downtown, the marina, and the bay. Opening August 6-8, the season will offer more than 40 concerts between August and November 2021, including eight concerts led by Music Director Rafael Payare. From classical music to Broadway, film, jazz, pop, Latin and classic rock, the season will showcase more than 50 featured artists who will perform as part of the Symphony’s expanded schedule of diverse outdoor concerts.

Chief Executive Officer Martha A. Gilmer said, “The long-awaited moment has come when we welcome San Diego to this magnificent, one-of-a-kind gathering place we have created for the entire community. Opening a summer season with rich and varied programming, the Symphony’s first notes at The Rady Shell at Jacobs Park will mark the beginning of a wonderful new experience of music and natural beauty in a city like no other.”

Music Director Rafael Payare said, “The Orchestra, our wonderful guest artists, and I can’t wait to feel the connection of finally performing for a live audience again. We are so excited for everyone to experience the amazing sound from The Rady Shell at Jacobs Park and to be dazzled by the lighting from our state-of-the-art projections. This is a place where the greatest artists in the world will want to perform for the one of the greatest audiences in the world.”

The Rady Shell at Jacobs Park will open on August 6 with Rafael Payare conducting the San Diego Symphony in the world premiere of Mason Bates’s Soundcheck in C Major, a commissioned work for orchestra and turntable; Aldemaro Romero’s Fuga con pajarillo; Saint-Saëns’ Concerto No. 1, featuring cellist Alisa Weilerstein; works by Gounod, Rossini, and Rodgers and Hammerstein featuring bass-baritone Ryan Speedo Green; Gershwin’s Rhapsody in Blue featuring pianist Jean-Yves Thibaudet; and Stravinsky’s Firebird Suite. The evening is directed by Gary Griffin and hosted by Vivian Scott Chew, and an inaugural gala event prior to the concert will include a spectacular dinner curated by celebrity chef Richard Blais.

The opening weekend will continue August 7 with “The Best of Broadway,” featuring the San Diego Symphony conducted by renowned musical theatre director Rob Fisher and showcasing Broadway luminaries Megan Hilty, Norm Lewis, Kelli O’Hara and Adrienne Warren. The opening weekend will be capped off on August 8 with seven-time GRAMMY Award-winner Gladys Knight with special guest Naturally 7—a renowned group of seven male vocalists who transform their voices into human instruments, effortlessly producing music of any genre—opening the concert.

The season will mark the symphony orchestra debut of singer songwriter and two-time Grammy Award winner Jason Mraz (September 26), with a concert featuring the San Diego Symphony. Mraz will perform songs such as The Remedy and Lucky, arranged specifically for orchestra. Stewart Copeland, legendary rock star, composer and founder of the Police, will make his debut with the San Diego Symphony in the world premiere of Police Deranged for Orchestra, an evening featuring Copeland on drums, vocalists, and the orchestra conducted by Edwin Outwater (August 27).

As part of its film series, the San Diego Symphony will perform two programs including Rocketman – Live in Concert, the film based on the life and music of Elton John, conducted by John Beal (September 3), and John Williams’s score to Star Wars: Return of the Jedi with the complete film on screen, conducted by Christopher Dragon (September 18-19).

For the full season of concerts, visit http://www.TheShell.org.

The inaugural gala and concert will support the artistic and engagement programs of the Symphony as it launches a new era at The Rady Shell at Jacobs Park. The event will include the opening concert conducted by Rafael Payare and the San Diego Symphony, with immersive sound and a light spectacular, and a cocktail reception at 5 pm followed by a dinner curated by celebrity chef Richard Blais. Inaugural Gala and Concert tickets begin at $2,500 per person and include a donation to the San Diego Symphony. Host Committee sponsorships begin at $10,000 and fully support the San Diego Symphony. Host Committee members receive the option to purchase the same seating for all three nights during the opening weekend. For more information: specialevents@sandiegosymphony.org.

COVID-19 Safety Protocols
As the San Diego Symphony prepares for The Shell’s inaugural season, the health and safety of its patrons, staff, volunteers, musicians, and guest artists remains its top priority. San Diego Symphony is committed to providing a safe and comfortable experience for audiences when performances resume in August.

Under the principle that health and safety are paramount, the roadmap for returning to live San Diego Symphony performances is designed to reduce the risk of COVID-19 transmission and is based on the latest information from local, state and national health officials. Health and safety protocols including requiring all patrons to provide proof of vaccination (2 weeks post completed vaccination) or negative COVID-19 test (within 72 hours) will enable audiences to gather outdoors at The Shell while wearing masks and without physically distanced seating. Health and safety requirements will be updated as local, state and national authorities continue to provide updates, and patrons will receive information about protocols in advance of their performances.

About The Rady Shell at Jacobs Park
The centerpiece of the 3.7-acre public Jacobs Park developed and managed by the San Diego Symphony on the city’s scenic Embarcadero, The Rady Shell is the first permanent outdoor venue in the San Diego Symphony’s century-long history, designed to host more than 100 concerts and events year-round. The project has been developed in partnership with the Unified Port of San Diego with 99% of the $85 million cost raised privately by the Symphony.
As innovative in design as it is spectacular in setting, offering 360 degrees of year-round music, sky and sea, The Rady Shell at Jacobs Park is an unprecedented resource for the Symphony’s expanded schedule of diverse outdoor concerts programmed by Music Director Rafael Payare, including an exciting roster of commissioned works and premieres, as well as performances by international touring artists and free programs, and will be available year-round for non-profit community groups, schools and individuals. Jacobs Park, owned and managed by the Symphony, will surround this venue with walkways, dining pavilions and recreational facilities in the heart of the Embarcadero and will be accessible to the public for free on most days of the year.

The venue was designed by Greg Mueller of the San Diego-based firm Tucker Sadler, with performance shell design by the London-based firm Soundforms.