The Park becomes the only national historic landmark to be recognized for sustainability achievements through the United States Green Building Council's LEED for Communities and Cities certification. 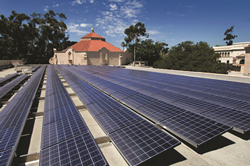 Solar array on the roof of the Fleet Science Center in San Diego's Balboa Park.

San Diego Mayor Todd Gloria said “Working together we’ve made sustainability part of the culture here in Balboa Park. Certification as a LEED community demonstrates that Balboa Park can be a catalyst for energy savings and other sustainability goals throughout the rest of the city.”

The Balboa Park Cultural Partnership announced today that San Diego’s famous Balboa Park has achieved a LEED for Cities and Communities certification. LEED, or Leadership in Energy and Environmental Design, was created by the U.S. Green Building Council (USGBC) and is the world’s most widely used green building rating system. The certification of Balboa Park marks the first time a cultural district and historic landmark has achieved such a designation. The park joins a network of more than 115 LEED certified cities and communities worldwide.

The achievement is the culmination of more than a decade of collaboration between the City of San Diego, nonprofit venues in Balboa Park, and partners such as San Diego Gas and Electric (SDG&E) that led to a number of major improvements including reduced energy use, water conservation, and waste diversion park-wide. The effect of these efforts are long-lasting improvements that not only support the city’s climate action goals, they improve the quality of life for all San Diegans.

Mahesh Ramanujam, President and CEO of USGBC, described the purpose of the certification and said, “USGBC created LEED for Communities and Cities to help improve the living standard for all, and to ensure every citizen in a city or community has access to healthy, sustainable, resilient, and equitable space.”

City Councilmember Stephen Whitburn, representative for District 3 that includes Balboa Park, added “Balboa Park is an important resource for all of our residents. And as our city’s crown jewel I’m proud to see Balboa Park become the first National Historic Landmark District to achieve a LEED for Communities and Cities certification.”

Among the park’s collaborators, SDG&E in particular has made a significant impact as both the founding partner for the park's Sustainability Program, as well as the primary financial sponsor. The generosity of SDG&E enabled the creation of a small team in the park to identify and guide infrastructure and process improvement projects that helped Balboa Park become as green as possible.

“12 years ago SDG&E became a founding partner for the Balboa Park Sustainability Program,” said Estela de Llanos, Vice President, Clean Transportation, Sustainability and Chief Environmental Officer, San Diego Gas & Electric. “Today we could not be prouder of everything the program has accomplished. The lasting changes it has made to improve water and energy efficiency are remarkable.“

From the perspective of the nonprofits in Balboa Park, beyond being good for the environment projects such as conversions to LED lighting, installation of solar arrays, updating heating and cooling systems, and retrofitting bathrooms to low-flow fixtures ensure important savings in utility costs that will continue over time.

or, watch videos about a variety of projects at Balboa Park TV on YouTube:
https://www.youtube.com/playlist?list=PLjobry_hHqjLlORWEqGCbslD3tAsfla1y

About Balboa Park
Located near downtown San Diego, Balboa Park is the largest urban cultural park in the United States. First established by the City of San Diego in 1868, it is also one of the oldest city parks in the nation and is the most visited single destination in San Diego. Its 1,200 acres include 17 museums, many gardens and attractions, the San Diego Zoo, 65 miles of hiking trails, and multiple athletic complexes to explore and discover. For more information, visit http://www.balboapark.org.

About the U.S. Green Building Council
The U.S. Green Building Council (USGBC) is committed to a prosperous and sustainable future through cost-efficient and energy-saving green buildings. USGBC works toward its mission of market transformation through its LEED green building program, robust educational offerings, an international network of local community leaders, the annual Greenbuild International Conference & Expo, the Center for Green Schools and advocacy in support of public policy that encourages and enables green buildings and communities. For more information, visit http://www.usgbc.org and connect on Twitter, Facebook and LinkedIn.