Santa Monica Press, long known as an eclectic independent press producing adult non-fiction books, has launched the first four titles of its new Young Adult (YA) imprint—Santa Monica Press/Teen—to wide critical acclaim in Publishers Weekly, School Library Journal, Psychology Today, Univision, and other major media outlets. Yvonne Castañeda's powerful memoir, Pork Belly Tacos with a Side of Anxiety, J.G. Bryan's debut novel Ventura and Zelzah, Amy Chan Zhou's heartbreaking Flowing with the Pearl River, and Linda Boroff's Holocaust novel The Dressmaker's Daughter have all received brilliant reviews in a wide variety of media as well as an enthusiastic response from librarians and YA readers across the U.S. and Canada. 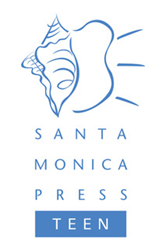 “The extremely positive response we’ve received about the launch of our Young Adult imprint -- from the media, librarians and readers -- has been extremely gratifying for all of the books' authors and the whole team here at Santa Monica Press,” says Publisher Jeffrey Goldman.

The imprint focuses on YA narrative non-fiction and historical fiction, with a percentage of sales being donated to non-profit organizations dedicated to promoting literacy.

“The response we’ve received has been extremely gratifying for all of the YA authors and the whole team here at Santa Monica Press,” says Publisher Jeffrey Goldman. “We’ve worked very hard to get to this point, and to see each of the titles enjoying strong reviews and receiving a great deal of attention from the media has been incredible."

Pork Belly Tacos with a Side of Anxiety https://amzn.to/37Egn20, Yvonne Castañeda's powerful memoir about her battles with mental health issues, addiction, and eating disorders, was the first YA title to be released, and immediately upon its debut in January, both the author and the book caught the attention of the media, librarians, and readers — both adults and teens.

“The book was endorsed by Sandra Cisneros and Junot Diaz and was enthusiastically reviewed by the Reviews Editor at School Library Journal,” publicist Adriana Senior adds, “and not only did she compare Yvonne’s book to Victor Martinez’s Parrot in the Oven, she said that the book’s ‘exploration of mental health from the Latinx perspective fills a much-needed gap.’ So we were off to a pretty good start!”

Castañeda appeared on a major Univision morning talk show, has been featured on numerous podcasts and radio shows, and is now regularly blogging for Psychology Today. The book has become a darling of librarians, and Santa Monica Press hopes to see many fans of Pork Belly Tacos at the upcoming ALA show in June in Washington D.C.

The review followed hot on the heels of powerful endorsements from authors Jack Gantos, Grant Farley, and Paul Haddad. “An audience hungry for the nostalgia of the 1970s is discovering and devouring this funny and poignant coming-of-age tale,” says Goldman.

Flowing with the Pearl River: Memoir of a Red China Girl https://amzn.to/3vDgl2p, Amy Chan Zhou’s heartbreaking tale of her family’s desperate attempts to survive the successive revolutions that occurred in 20th century China, has been receiving an impressive amount of attention in the Chinese-American press. The esteemed Chinese American Voice described Chan Zhou’s writing as “exquisite” and proclaimed, “Chan Zhou never forgets to express her feelings and let readers feel the truth! . . . You can feel the plot and heart of each and every paragraph of text.”

YA reviewers and librarians have also been quick to praise Flowing with the Pearl River. The Youth Services Book Review enthused: “The pacing is fast, and the book is stuffed to bursting with details. . . . For the curious reader of the Cultural Revolution era or of historical memoirs, you will find a quick and relatively affecting set of stories in its pages. . . . Fans of writing from the Chinese diaspora or memoirs will enjoy this.”

Linda Boroff’s story of romance set amongst the Holocaust, The Dressmaker’s Daughter https://amzn.to/3MrkxsR, has been reaping attention for its blunt depiction of sexual abuse and the trauma that results. San Diego Jewish World notes that the book is “far from a ‘happily ever after’ story,” and goes on to praise the novel for recognizing “that sexually brutalized women also are irreparably traumatized.”

According to Goldman, the reviews have resulted in a significant increase in YA submissions from authors and agents. He says, “We’ve been receiving some really incredible manuscripts and are about to announce the signing of another half-dozen wonderfully diverse and exciting young adult titles. It’ll be our usual mix of historical fiction and narrative non-fiction, once again a really fantastic, eclectic mix of books.”

Santa Monica Press has been publishing an eclectic line of non-fiction books for over 25 years. Our critically acclaimed titles are sold in chain, independent, on-line, and university bookstores around the world, as well as in some of the most popular retail, gift, and museum outlets in North America. Our authors are recognized experts who are sought after by the media and receive newspaper, magazine, internet, social media, radio, and television coverage both nationally and internationally. At Santa Monica Press, we’re not afraid to cast a wide editorial net. Our list of lively and modern non-fiction titles includes books in such categories as pop culture, film, music, humor, biography, travel, and sports, as well as regional titles focused on California. We have recently added Young Adult Fiction and Young Adult Narrative Non-Fiction to our list.
Books distributed by PGW/Ingram Publisher Services.