“The Silent Knight” from Christian Faith Publishing author Sarah Reed is a touching story about a young lad who begins to understand faith, hope, and love as well as strength in times of uncertainty. 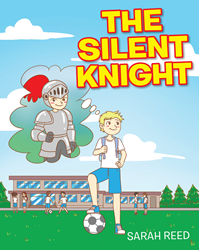 “The Silent Knight”: an insightful children’s story about Joel who feels anxiety in his growing-up years and learns the essence of faith and trust in God that inspire strength in his heart and mind. “The Silent Knight” is the creation of published author Sarah Reed, a loving mother and a dedicated writer.

Reed shares, “Joel is an elementary-aged boy who loves sports, his friends and, of course, cookies—chocolate chip cookies to be exact, fresh from the oven, with milk. Joel has started a new school year, and with it came new emotions—emotions that Joel did not recognize or know how to communicate with his parents. His family was the same, his friends were the same, and he even stayed on the same soccer team. He will be in the same school building, just a grade older. Joel had developed a fear of the unknown, future, and failure. He did not know where it came from or what it was, but he knew he felt heaviness in his heart and stomach at school. He knows Jesus is bigger than the anxiety that he feels, but he is not sure how to overcome the heaviness that sits in his stomach. One night, while spending some time with his dad, Joel has an idea—an idea that will change his life forever…”

Published by Christian Faith Publishing, Sarah Reed’s new book is a wonderful teaching tool for parents to educate their children on the importance of steadfast belief in God in times of unexplained sorrow.

Follow Joel as he begins to discern his feelings and make the initiative to rise above the heaviness in his heart with the help of God and loved ones.

View the synopsis of “The Silent Knight” on YouTube.

Consumers can purchase “The Silent Knight” at traditional brick-and-mortar bookstores or online at Amazon.com, Apple iTunes store, or Barnes and Noble.

For additional information or inquiries about “The Silent Knight,” contact the Christian Faith Publishing media department at 866-554-0919.