Historic Application Has Been Filed by Activist and Businessman Satinder Dhillon 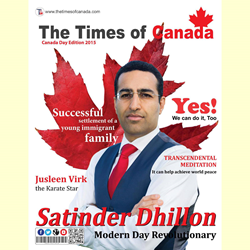 Dhillon, who has been compared to Malcolm X and Gandhi by Canadian authorities, has fought this battle for nearly two decades.

In the filing, Dhillon's attorney, who is a constitutional expert from Toronto, asks the Supreme Court of Canada to intervene.

To view the court filing please visit - http://www.thetruthmustbeallowed.com - or see the attachments to this article.

Dhillon, who has been compared to Malcolm X and Gandhi by Canadian authorities, has fought this battle for nearly two decades (File No. CA 42922).

Dhillon is writing a book about the case and there is a movie being written about the 20+ year long ordeal.

Along his journey Dhillon has been in contact with many famous lawyers from around the world that advised him. Among them is Wikileaks and Julian Assaange's former lawyer Mr. Mark Stephens, Mr. Jamshed Mistry - a high profile human rights and celebrity lawyer from Mumbai and member of the Canadian Bar Association, and Mr. Martin Garbus who has represented Nelson Mandela, Al Pacino, Robert Redford, and many others.

To read more about this case please visit:

To read more about the movie being written about Dhillon, please visit:

Memorandum of Argument - Filed in the Supreme Court of Canada

Reply - Filed in the Supreme Court of Canada

Stamped Page - Filed in the Supreme Court of Canada