Savage and Cooke has produced over 100,000 gallons of RX 20/20 and will continue to produce more hand sanitizer to help combat COVID-19 Virus 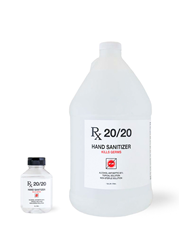 I am very proud of my staff at Savage & Cooke who sprung into action immediately and converted our operations from distilling Whiskey to producing as much WHO approved hand sanitizer as possible. We have completely suspended all distillery activities and are 100% committed to helping our community.

Savage and Cooke distillery, founded by Dave Phinney, officially repurposed the Savage and Cooke distillery early March to transition into hand sanitizer production for donation and to help aide in the shortage of availability within the surrounding community and cities. Today the hand sanitizer is available for online purchase anywhere in the United States by the gallon ($38.40) or (4) 9 oz bottles ($22.00).

The hand sanitizer is produced at Savage and Cooke distillery, located on Mare Island, the first naval shipyard on the Pacific Coast. All whiskey production has temporarily ceased and converted to produce RX 20/20 Hand Sanitizer to aide in the sudden increase in demand for hand sanitizer.

“I am very proud of my staff at Savage & Cooke who sprung into action immediately and converted our operations from distilling Whiskey to producing as much WHO approved hand sanitizer as possible. We have completely suspended all distillery activities and are 100% committed to helping our community avoid infection. We are doing this at scale – tens of thousands of gallons to have the most impact,” said Dave Phinney, Founder and Owner, Savage and Cooke.

Savage and Cooke initiated its focus and distribution efforts locally to begin with, including surrounding cities, areas of Napa and Sonoma counties and local health care providers as well as companies such as Ace Hardware, Tesla, and the United States Post Office. They have now expanded ability to produce and fulfill the increased demand for online orders. Additionally, Savage and Cooke has hired local bartenders and restaurant workers who have been furloughed to help with orders and delivery of the hand sanitizer.

Phinney is in conversations with the Mayor of Vallejo, Bob Sampayan, to create hand sanitizer for essential health care workers and charities; Savage & Cooke is also open to discussing larger needs for distribution across the country in states that have been highly impacted.

“We’ll do this as long as there’s a need, if it's a week then great, if it's a year, it is what it is,” Phinney said. “My priority is that we’re able do it at a scale where you can make a difference and go all in on that effort.”

About Savage and Cooke

Savage and Cooke distillery is located on Mare Island, near the city of Vallejo. Mare Island has a rich and colorful history; first as an important naval shipyard and today as a hub of activity including manufacturing, craft beverages, art, technology, and film production, all located on prime waterfront property. In 1854, Mare Island was established as the first naval yard on the Pacific Coast and was once one of the busiest shipyards in the world.

One of the most prolific winemakers in Napa Valley, Phinney then created the acclaimed flagship blend “The Prisoner” which later sold for $285 Million. Phinney continues to consult for Orin Swift and produces wines from his vineyards in France, Italy, Spain and Greece. Phinney began distilling spirits in 2014, which led to the new Savage & Cooke distillery venture.

Savage and Cooke produces Second Glance American Whiskey, The Burning Chair Bourbon, and Lip Service Rye, all aged in Phinney's wine casks with water and grains from Phinney's property. The distillery will be launching their new restaurant on the property later this year.