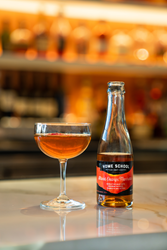 The craft cocktail consumer demands the highest quality. Consumer behavior has changed with more focus on “at home” occasions. Home School satisfies the need for a high-quality craft cocktail with supreme convenience.

Savage and Cooke distillery, located just outside of San Francisco on historic Mare Island, which was founded by famed winemaker Dave Phinney who is also now known for his distillery efforts, has launched their first premium Ready to Drink craft cocktail in the US.

Home School is a full strength bottled craft cocktail at 70 proof, packaged in a 4-pack with 2 servings per bottle. Savage and Cooke’s bottled cocktails will be available nationwide in select stores. The RTD portfolio starts with a Blood Orange Manhattan and more recipes to follow.

About Savage and Cooke:
Savage and Cooke distillery is located on Mare Island, near the city of Vallejo. Mare Island has a rich and colorful history; first as an important naval shipyard and today as a hub of activity including manufacturing, craft beverages, art, technology, and film production, all located on prime waterfront property. In 1854, Mare Island was established as the first naval yard on the Pacific Coast and was once one of the busiest shipyards in the world.

One of the most prolific winemakers in Napa Valley, Phinney then created the acclaimed flagship blend “The Prisoner” which later sold for $285 Million. Phinney continues to consult for Orin Swift and produces wines from his vineyards in France, Italy, Spain and Greece. Phinney began distilling spirits in 2014, which led to the new Savage & Cooke distillery venture.

Phinney recently produced over 100,000 gallons of hand sanitizer during the COVID-19 shortage in his commitment to helping the community and people all over the US avoid infection, transforming Savage and Cooke distillery into a temporary hand sanitizer production facility.