The American Foundation of Savoy Orders, Inc. (Savoy Foundation) will host its 25th annual Ballo di Savoia (Royal Savoy Ball) on Saturday, December 17, 2022 in New York City under the patronage of Their Royal Highnesses Prince Victor Emmanuel and Princess Marina of Savoy. H.R.H. Prince Emmanuel Philibert of Savoy will be the guest of honor. The charity gala will raise funds for the Foundation’s mission– Chivalry for Children’s Causes™ – benefiting Cooley’s Anemia Foundation and A Chance in Life Organization. 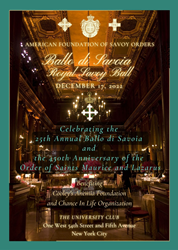 “Charity is rooted deeply in the values of the Dynastic Orders of the Royal House of Savoy, particularly for medical and humanitarian care for disadvantaged children"

The American Foundation of Savoy Orders, Inc. (Savoy Foundation) will host its 25th annual Ballo di Savoia (Royal Savoy Ball) on Saturday, December 17, 2022 in New York City under the patronage of Their Royal Highnesses Prince Victor Emmanuel and Princess Marina of Savoy. H.R.H. Prince Emmanuel Philibert of Savoy, Prince of Venice and Prince of Piedmont, will be the guest of honor. H.R.H. Prince Dimitri of Yugoslavia will also attend the white tie, red carpet charity event, supported by members and friends of the Dynastic Orders of the Royal House of Savoy, which will bring together about 300 guests at a new venue, The University Club in New York City. The winter charity gala will celebrate two milestones: the 25th Silver Anniversary of the Royal Savoy Ball and the 450th Anniversary of the Order of Saints Maurice and Lazarus, founded in 1572.

The event organizers are asking guests to help raise money for two selected charities: "Cooley’s Anemia Foundation" which funds medical research and education to benefit individuals living with the genetic blood disorder, thalassemia, and "A Chance in Life -The Village of Staten Island Program," a US-based program in New York City for forgotten youth dedicated to providing shelter, education, and leadership development for at-risk youth.

In a joint statement concerning the 2022 Ballo di Savoia to be held on the weekend of December 16-18, Messrs. Carl Morelli, Chairman of the American Foundation of Savoy Orders and Joseph Sciame, its President, commented: “We are absolutely looking forward to yet another successful Ballo di Savoia in New York City at Fifth Avenue’s famous University Club on Saturday, December 17th, as we welcome hundreds of our members and guests at this annual event. This year, the two charities that provide direct support for children to which we are dedicating our efforts at fundraising and fulfill the Savoy Foundation’s mission of Chivalry for Children's Causes are: Cooley’s Anemia Foundation and A Chance for Life in New York City, formerly known as Boys and Girls Town of Italy."

Prior to Saturday’s evening Gala, a reception on Friday evening, December 16 at the Lotos Club will be held for guests attending the Savoy Ball.

ABOUT THE ROYAL HOUSE OF SAVOY
The Dynastic Orders of the Royal House of Savoy are among the oldest orders of Knighthood and Merit in the world. The Savoy Orders are headquartered in Geneva, Switzerland and have 35 Delegations worldwide that support the Orders’ ongoing charitable works. Their origins and their principles, traditions and humanitarian goals date back a thousand years. H.R.H Prince Victor Emmanuel of Savoy, Prince of Naples and Duke of Savoy, is Head of the House of Savoy and Grand Master of the Savoy Orders. Prince Emanuele Filiberto is his son and the hereditary crown Prince of Italy and currently serves as President of the Council of the Savoy Orders.

In 1946, when the Kingdom of Italy came to an end, the House of Savoy was the Europe’s oldest reigning dynasty. The heads of the House of Savoy had ruled, first as counts, then as dukes and finally as kings, for almost a thousand years. Descended in the direct male line from a tenth-century vassal of the Holy Roman Emperor, the Savoys ruled Savoy, where they established their capital at Chambery. Their dominion was eventually extended to include Piedmont, Aosta and other territories in what are now Italy, France and Switzerland. By the eighteenth century, the Savoys were kings of Sardinia, and it was under the aegis of the House of Savoy that the Italian states were united by 1871.

The Royal Family’s heritage can be seen in castles and palaces, and in the beauty of the northwestern Italian city of Turin, the Savoys' magnificent capital in the heart of Piedmont in the 16th into the 19th centuries. The dynastic chivalric traditions of the Royal House of Savoy continue. The Order of the Annunciation and the Order of Saints Maurice and Lazarus, two of the world's oldest knightly institutions, are still alive today, epitomizing the dynasty's medieval spirit while supporting very modern charitable works in Italy, Switzerland, France, Japan, the Americas and elsewhere. Chivalry lives. Today, the House of Savoy remains one of the oldest royal dynasties.

The American Foundation of Savoy Orders, Incorporated, http://www.savoia.org a tax-exempt 501(c)(3) charitable organization, supports local, national, and international charities focusing on medical, educational, and humanitarian fields, including philanthropy for U.S. veterans, hospitals and relief agencies for children, the poor, sick and elderly. In 2005, the Foundation became a Non-Governmental Organization in Roster Consultative Statues with the Economic and Social Council of the United Nations. In 2019, the Savoy Foundation launched a new charitable initiative - Chivalry for Children’s Causes™ - a multi-year program assisting institutions and charitable organizations that provide aid to children and families in need, building stable, healthy families, whether enrichment spaces or basic meals for improved health and stable living conditions in poor economic environments. The program is made possible thanks to generous support from the members and friends of the American Delegation of Savoy Orders.