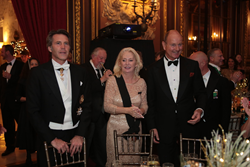 On Saturday evening, December 14, 2019, the 22nd Ballo di Savoia (Savoy Ball), the annual winter charity gala hosted by the American Foundation of Savoy Orders, returned to the elegant Metropolitan Club. The Savoy Foundation was delighted to welcome back His Royal Highness Prince Emmanuel Philibert of Savoy, Prince of Venice and Prince of Piedmont and his cousin His Royal Highness Prince Dimitri of Yugoslavia, who were guests of honor for this occasion. The Ball was part of a four-day weekend of events organized by the American Delegation of Savoy Orders and the American Foundation of Savoy Orders, continuing the spirit and tradition of charitable giving and hospitaller care of the historic dynastic orders of knighthood and merit of the thousand-year Royal House of Savoy. More than 300 patrons, benefactors and guests attended the white-tie dinner-dance and raised funds in support of the Savoy Foundation's philanthropic mission - Chivalry for Children's Causes - and the event’s primary beneficiary - The New York Foundling Summer Camp Program for inner city foster-care children. Prior to Saturday’s evening Gala, a private reception for Patrons and Benefactors was held and a Welcome Reception on Friday evening, December 13 at the Lotos Club for guests attending the Savoy Ball.

At the Ball on Saturday, a highlight of the evening was the remarks by Prince Emmanuel Philibert who praised the achievements of the Savoy Foundation in the past 25 years. “It is so personally gratifying for me to witness how splendidly you are continuing the chivalric traditions of the Savoy Orders and how you have so creatively adapted and expanded – in the Western Hemisphere – my family’s dedication to humanitarian causes over our 1000 year history. Compared to European countries, you are a young nation – but, your spirit of innovation, creativity and love for humanity sets a shining example that is recognized throughout the world…To the summer camp program of the New York Foundling – who we congratulate and applaud this evening – on the 150th Anniversary of their founding by the Sisters of Charity in 1869.”

The Chairman of the Board Carl J. Morelli and President Joseph Sciame of the Savoy Foundation were proud to announce that the event was a record-breaking success! Funds raised would provide a summer camp experience for 150 children in the summer of 2020 where young people will have the opportunity to enjoy a vacation away from inner city streets and connect with nature, and enable them to bond with their peers, learn new skills, stay active and nurture their creativity. Bill Baccaglini, President and CEO of the Foundling, shared with the evening’s guests his reflections on the Foundling’s 150th anniversary and expressed his gratitude to the Savoy Foundation for the impact that the funds raised at the charity ball would have for more than 100 needy families: “Residing in some of New York City’s most impoverished communities, our kids are given a chance they wouldn't otherwise have: the opportunity to experience the joys of summer camp, a rite of passage for most American children.” He was proud to introduce a young man who participated in the summer camp program as a testimonial example of the impact of the program has had for children on welfare in its foster care system.

In addition to attending the Savoy Ball, the Prince, whose royal title is also Prince of Venice, attended the American Foundation of Savoy Orders' inaugural cocktail reception for the newly established Savoy Orders Youth Program in the United States, on the evening of Thursday, December 12, 2019. The event was jointly sponsored with Save Venice Inc. which raises funds to preserve the artistic heritage of Venice. The Prince and the Dynastic Orders of the Royal House of Savoy stand in solidarity with Venice, the city of his title, which has recently suffered the second worst flood in 50 years.

Next year’s Savoy Ball is scheduled for Saturday, December 12, 2020, at the Metropolitan Club in New York City.

ABOUT THE ROYAL HOUSE OF SAVOY
The Dynastic Orders of the Royal House of Savoy are among the oldest orders of Knighthood and Merit in the world. The Savoy Orders are headquartered in Geneva, Switzerland and have 35 Delegations worldwide that support the Orders’ ongoing charitable works. Their origins and their principles, traditions and humanitarian goals date back a thousand years. HRH Prince Victor Emmanuel of Savoy, Prince of Naples and Duke of Savoy, is Head of the House of Savoy and Grand Master of the Savoy Orders. Prince Emmanuel Philibert is his son and the hereditary crown Prince of Italy and currently serves as President of the Council of the Savoy Orders.

In 1946, when the Kingdom of Italy came to an end, the House of Savoy was Europe’s oldest reigning dynasty. The heads of the House of Savoy had ruled, first as counts, then as dukes and finally as kings, for almost a thousand years. Descended in the direct male line from a tenth-century vassal of the Holy Roman Emperor, the Savoys ruled the Alpine state of Aosta, as well as Savoy, where they established their capital at Chambery. Their dominion was eventually extended to include Piedmont and other territories in what are now Italy, France and Switzerland. By the eighteenth century, the Savoys were kings of Sicily and then Sardinia, and it was under their aegis that the Italian states were united by 1871.

ABOUT THE AMERICAN FOUNDATION AND THE AMERICAN DELEGATION OF SAVOY ORDERS
Headquartered in New York City, the American Delegation of Savoy Orders, which includes the United States of America, is among the 35 delegations of the Savoy Orders located throughout Europe, the Americas and Japan.