The American Foundation of Savoy Orders, on August 18, 2022, presented a record grant of $150,000 to Caterina’s Club, a charity providing meals and housing for homeless children in Southern California, from funds raised at the Foundation's fourth annual 2022 "Notte di Savoia" Spring Charity Gala. The benefit gala was held on Saturday, April 9, 2022, in Los Angeles at the Jonathan Club. 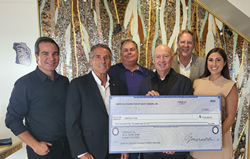 “The Savoy Foundation's charitable and humanitarian purposes like Caterina’s Club today, are very much in keeping with the centuries-old hospitaller traditions of the Order of Saints Maurice and Lazarus"

More than 170 patrons, benefactors and guests gathered to support the Savoy Foundation’s fourth annual black-tie dinner dance. The Notte di Savoia continues a thousand-year tradition of goodwill and charitable giving under the patronage of the Royal House of Savoy. His Royal Highness Prince Emmanuel Philibert of Savoy, Prince of Venice and Prince of Piedmont, was the honored guest at the event that raised funds in support of the Savoy Foundation's philanthropic mission - Chivalry for Children's Causes. The event’s primary beneficiary for the past four years – Caterina’s Club - was founded by Savoy Knight Bruno Serato and feeds over 5,000 homeless children in Southern California every day.

Daniel J. McClory, Savoy Foundation Board Member and Event Co-Chair of the Notte di Savoia charity fundraiser, with Savoy cavalieri and event patrons Sinan Kanatsiz and Patrick Mahoney and with event patron Dennis Murchison, presented the grant to Chef Bruno Serato, founder of Caterina’s Club in Anaheim, California. Chef Bruno Serato, a cavaliere of the Dynastic Orders of the Royal House of Savoy, expressed his gratitude to the Savoy Foundation for the impact that the funds raised at the charity event would have for more than 5,000 homeless and motel children.

Messrs. Carl J. Morelli Chairman and Joseph Sciame, President of the American Foundation of Savoy Orders, commented: “We are each overwhelmed by the generosity of our supporters who attended the April 2022 Notte di Savoia in Los Angeles as well as so many others not able to be with us who donated to our GoFundMe efforts. Our American Foundation of Savoy Orders has truly been blessed with the incredible members of its American Delegation, and the efforts of the Savoy Foundation with the Notte di Savoia, reflect the very charitable work upon which our Savoy Orders are based. From East to West, from North to South, our members join forces to respond to societal needs, and Caterina’s Club is a great example of it. We applaud all, especially Chef Bruno Serato and Host Committee Co-Chairs Daniel and Florentina McClory for their good-will and spirited work in making the Notte a success” Carl Morelli, Esq., and Joseph Sciame – respectively the Chairman of the Board and President of the American Foundation of Savoy Orders – concluded.

“The Savoy charitable and humanitarian purposes like Caterina’s Club today, are very much in keeping with the centuries-old hospitaller traditions of the Order of Saints Maurice and Lazarus, one of the oldest institutions of Western and Christian civilization, founded in 1572 and stemming from the eleventh-century hospitaller Order of Saint Lazarus of Jerusalem,” Daniel J. McClory, Director of the American Foundation of Savoy Orders and Co-Chair of the Fourth Annual Notte di Savoia Los Angeles points out.

Chef Bruno Serato stated: "Today, Caterina’s Club feeds over 25,025 children a week with “Feeding the Kids in America” program. Frustrated that feeding the children was not enough, we began a second program called “Welcome Home,” which provides families without a fixed abode the necessary resources to move into the safety and stability of an apartment or condo."

For more information on the philanthropic causes supported by the Savoy Foundation, please click here.

Businesses, individuals and organizations can donate here and find additional information about the Savoy Foundation Programs.

ABOUT THE SAVOY FOUNDATION AND THE AMERICAN DELEGATION OF SAVOY ORDERS
The American Delegation of Savoy Orders, which includes the United States of America, is among 35 delegations of the Savoy Orders located throughout Europe, the Americas and Japan. The Dynastic Orders of the Royal House of Savoy are among the oldest orders of chivalry in the world. Their origins and their principles, traditions and humanitarian goals, like those of the Royal House of Savoy that has the hereditary right to confer them, date back a thousand years. The American Delegation of Savoy Orders through its charitable arm, The American Foundation of Savoy Orders, Incorporated, contributes to humanitarian, hospitaller and charitable projects and initiatives in the United States and abroad, particularly in healthcare and hospice care, disaster relief, education programs and children's causes.

The American Foundation of Savoy Orders, Incorporated, a 501(c) (3) charitable organization headquartered in New York City, has supported local, national, and international charities focusing on medical, educational, social assistance and humanitarian fields, including philanthropy for hospitals, relief agencies, children’s causes and hospice care for the poor, infirm and elderly. The Foundation whose current mission is “Chivalry for Children’s Causes” is a Non-Governmental Organization (NGO) in Roster Consultative Statues with the Economic and Social Council of the United Nations.

For more information on supporting the causes of the American Foundation of Savoy Orders, see below.