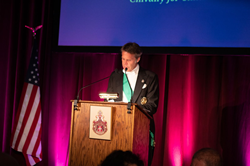 The important children’s causes that you are supporting tonight help the Savoy Foundation to continue – together – the centuries old traditions of the Savoy Royal Family -- helping the underprivileged and vulnerable.

On Saturday evening, December 11, 2021, the 24th Ballo di Savoia (Royal Savoy Ball), the annual winter charity gala hosted by the American Foundation of Savoy Orders, returned to the iconic Metropolitan Club. The Savoy Foundation was delighted to welcome back His Royal Highness Prince Emmanuel Philibert of Savoy, Prince of Venice and Prince of Piedmont and his cousin His Royal Highness Prince Dimitri of Yugoslavia, who were guests of honor for this occasion. The Ball was part of a four-day weekend of events organized by the American Delegation of Savoy Orders and the American Foundation of Savoy Orders, continuing the spirit and tradition of charitable giving and hospitaller care of the historic dynastic orders of knighthood and merit of the thousand-year Royal House of Savoy.

More than 200 patrons, benefactors and guests gathered to support the Savoy Foundation’s 24th Annual white-tie dinner-dance. The event raised funds in support of the Savoy Foundation's philanthropic mission - Chivalry for Children's Causes - and the event’s primary beneficiary - The New York Foundling Summer Camp Program for inner city foster-care children. Prior to Saturday’s evening Gala, a welcome reception on Friday evening, December 10 at the Lotos Club for guests attending the Royal Savoy Ball. At the ball on Saturday, gala attendees enjoyed a champagne reception, hors d’oeuvres and signature cocktails before the main program began with a royal fanfare. Following the main seated dinner, guests enjoyed a sumptuous Viennese dessert table in the adjoining room and ballroom dancing with the Mitch Kahn orchestra.

A highlight of the evening was the remarks by Prince Emmanuel Philibert who praised the achievements of the Savoy Foundation in the past 28years. “I want to thank all the very generous donors who made this evening such a great success, especially during these difficult and challenging times. The important children’s causes that you are supporting tonight help us to continue – together – the centuries old traditions of my family -- helping the underprivileged, whose needs are so much greater than our own. “

Bill Baccaglini, President and CEO of the Foundling, expressed his gratitude to the Savoy Foundation for the impact that the funds raised at the charity ball would have for more than 50 needy families: “Residing in some of New York City’s most impoverished communities, our kids are given a chance they wouldn't otherwise have: the opportunity to experience the joys of summer camp, a rite of passage for most American children.” He was proud to introduce a young woman who participated in the summer camp program and became a camp counselor as a testimonial example of the impact of the program has had for children in its foster care system.

This year’s Savoy Ball is scheduled for Saturday, December 10, 2022, at the Metropolitan Club in New York City. For more information on supporting the Savoy Foundation's Chivalry For Children’s Causes, click here

ABOUT THE AMERICAN FOUNDATION AND THE AMERICAN DELEGATION OF SAVOY ORDERS
Headquartered in New York City, the American Delegation of Savoy Orders, which includes all 50 of the United States of America, is among the 35 delegations of the Savoy Orders located throughout Europe, the Americas and Japan.

ABOUT THE ROYAL HOUSE OF SAVOY
The Dynastic Orders of the Royal House of Savoy are among the oldest orders of Knighthood and Merit in the world. The Savoy Orders are headquartered in Geneva, Switzerland and have 35 Delegations worldwide that support the Orders’ ongoing charitable works. Their origins and their principles, traditions and humanitarian goals date back a thousand years. HRH Prince Victor Emmanuel of Savoy, Prince of Naples and Duke of Savoy, is Head of the House of Savoy and Grand Master of the Savoy Orders. Prince Emmanuel Philibert is his son and the hereditary crown Prince of Italy and currently serves as President of the Council of the Savoy Orders.
In 1946, when the Kingdom of Italy came to an end, the House of Savoy was Europe’s oldest reigning dynasty. The heads of the House of Savoy had ruled, first as counts, then as dukes and finally as kings, for almost a thousand years. Descended in the direct male line from a tenth-century vassal of the Holy Roman Emperor, the Savoys ruled the Alpine state of Aosta, as well as Savoy, where they established their capital at Chambery. Their dominion was eventually extended to include Piedmont and other territories in what are now Italy, France and Switzerland. By the eighteenth century, the Savoys were kings of Sicily and then Sardinia, and it was under their aegis that the Italian states were united by 1871.