Scener will host films and anime virtual screenings during “Comic-Con@Home”; the Scener Watch Party Platform brings co-watching for up to a million guests in each virtual theater 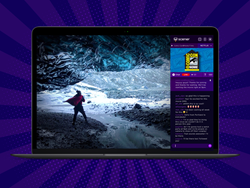 This is an exciting moment for fans of films and anime, giving Comic-Con’s incredible community an opportunity to come together virtually while enjoying their favorite entertainment content.

Scener, the co-watching platform where people can connect and interact while streaming the shows they love, announced it is the exclusive watch party affiliate for Comic-Con@Home, supporting its lineup of virtual screenings for films and anime.

Scener’s Watch Party Platform is an all-new way to connect and build community around streaming entertainment. Attendees will be able to meet with fellow fans and friends, participate in the official programming, and host their own watch parties with up to a million guests in each virtual theater. The platform supports seven major subscription video-on-demand (SVOD) services, also announced today.

“We’re excited to have Scener as part of the Comic-Con@Home initiative,” Said David Glanzer, spokesperson for the non-profit Comic-Con. “One of the major reasons for launching the online version was to maintain the Comic-Con sense of community. Scener literally brings people together, so while we may not be able to meet in person this summer, Scener allows us to meet, and share our passions virtually.”

Joe Braidwood, Scener co-founder said: “This is an exciting moment for fans of films and anime, giving Comic-Con’s incredible community an opportunity to come together virtually while enjoying their favorite entertainment content. We are thrilled to have Con-Goers be one of the first to experience our new Watch Party Platform, a virtual space where friends and fans can meet, interact and host watch parties, no matter where they are in the world.”

Anyone can now use Scener’s Watch Party Platform to host screenings with up to 10 co-hosts on video chat, enabling an audience of up to a million guests to interact and synchronize playback from Netflix, Disney+, HBO Max, Hulu, Prime Video, Funimation, and Vimeo, together. All participants require a subscription to the service they are watching.

Comic-Con@Home’s Virtual Screenings, supported by Scener, will feature two tracks — films and anime — with live community chat. Exact screening details and times can be found at scener.com/comic-con with additional details added as the events approach.

The films lineup includes some of today’s smash hits, classics, noirs, such as: “Comic-Con Episode IV: A Fan’s Hope,” “Clue,” “Knives Out,” “The Angry Red Planet,” “Battle Beyond the Stars”, “George Lucas in Love,” “Star Wars: Episode IV - A New Hope,” “Troops,” “Day of the Triffids,” “Monty Python and the Holy Grail,” “Dragonslayer,” “The Gamers: Dorkness Rising”, “Fantasia,” “Max Fleischer's: The Complete Animated Superman,” “Man of Steel” and “Batman: Mask of the Phantasm.”

To RSVP for Comic-Con@Home’s Virtual Screenings powered by Scener, go to scener.com/comic-con. To learn more about Scener and how you can host your own Watch Party, visit scener.com. Scener watch parties are available to join from any device, and can be hosted from Mac, Windows PC, and Chromebook.

About San Diego Comic-Con
SAN DIEGO COMIC CONVENTION (Comic-Con) is a California Nonprofit Public Benefit Corporation organized for charitable purposes and dedicated to creating the general public’s awareness of and appreciation for comics and related popular art forms, including participation in and support of public presentations, conventions, exhibits, museums and other public outreach activities which celebrate the historic and ongoing contribution of comics to art and culture. In addition to its San Diego convention each summer (the premier event of its kind in the world), Comic-Con organizes the Anaheim-based WonderCon each spring, the SAM (Storytelling Across Media) symposium in the fall and is the parent organization of the Comic-Con Museum in San Diego’s Balboa Park. On the web: Comic-Con.org, Facebook.com/comiccon, and follow us on Twitter (@Comic_Con) and on Instagram (@comic_con)

About Scener
Scener, the Virtual Movie Theater, is a co-watching platform that enables anyone to connect and interact while synchronizing playback of streaming entertainment. With Scener’s new Watch Party Platform, up to 10 people can co-host a public theater for an audience of up to a million over video chat, a new way to hold screenings of the world’s best streaming entertainment content. With private theaters, up to 10 friends can interact over video and chat while synchronizing playback of their favorite shows and movies. Scener supports Netflix, HBO Max, Disney+, Hulu, Prime Video, Funimation, and Vimeo; an account is required for each participant. Based in Seattle, WA, Scener launched in 2018 and was incubated by media streaming pioneer RealNetworks Inc. To join the community and host your own Virtual Movie Theater in seconds visit scener.com.