In a historic renovation of the city’s Bay Area Rapid Transit system, Schindler to install and replace 41 escalators to improve passenger movement at four stations. 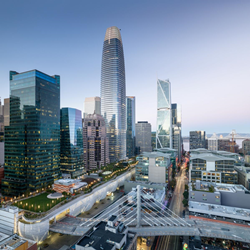 BART connects people from the San Francisco Peninsula with other cities in the East Bay with transportation to downtown offices, shopping centers, venues and other Bay Area destinations.

With this renovation project, we are making great strides to improve commuters’ experience in the Bay Area. We look forward to a close cooperation with Schindler to enhance escalator reliability.

Today, Schindler announced that its U.S. operations has been awarded a multi-year contract to replace and install escalators in four downtown stations in one of the U.S.’s top city public transit systems for the Market Street Escalators Renovation Project of the San Francisco Bay Area Rapid Transit District (BART).

Residents and visitors to the Golden Gate city in the future will be able to experience the city’s oldest transit network with greater convenience. The city’s busy core stations of Embarcadero, Montgomery, Powell and Civic Center/United Nations Plaza will be equipped with 41 Schindler 9700 transit escalators designed for high-traffic demands. Embarcadero and Montgomery stations are among the busiest of BART’s 48 stations, with more than 93,000 people passing through the stations on an average weekday in 2018.

“Escalators are so important because they enhance people’s mobility,” said Bevan Dufty, President of the BART Board of Directors. “This is a vital installation milestone, as we will now have a single escalator technology at all our core stations. With this renovation project, we are making great strides to improve commuters’ experience in the Bay Area. We look forward to a close cooperation with Schindler to enhance escalator reliability.”

“This is an exciting project for Schindler and we look forward to continuing our solid relationship with BART to keep people moving safely and efficiently throughout the Bay Area’s public transit system,” said Greg Ergenbright, President, U.S. Operations for Schindler. “Our local expertise on the ground and years of knowledge in the industry position Schindler well for this historic project.”

The contract is the largest to replace escalators in BART’s history. Many of the units being replaced are among the oldest in the entire BART system, which started its service in 1972. The project is expected to begin in spring of 2020.

Passenger demand has increased over the years at the downtown stations, with the Civic Center / United Nations Plaza acting as a major hub for passengers moving throughout the San Francisco Bay Area. Embarcadero and Montgomery stations are only minutes away from Salesforce Tower, the city’s new landmark building - the tallest office west of Chicago - which is equipped with 34 Schindler elevators. As city-dwellers move around the city’s complex infrastructure each day, Schindler’s elevators and escalators provide the urban mobility that they need to connect their journeys between buildings and transport systems.

BART connects residents and visitors from the San Francisco Peninsula with other cities in the East Bay with transportation to downtown offices, shopping centers, tourist attractions, entertainment venues, universities and other destinations for the Bay Area.