School Districts Partnering with Gaggle Saved the Lives of Over 900 Students in 2019–20; Severe Domestic Abuse Reports Rose 79% During School Closures 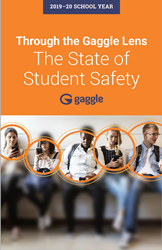 Through the Gaggle Lens: The State of Student Safety

“With school now taking place in our students’ living rooms and bedrooms, safety is more important than ever,” said Jeff Patterson, Gaggle's founder and CEO.

During the 2019–20 school year, Gaggle was instrumental in saving the lives of 927 students. While this number represents a general increase of 28% over the preceding school year, a significant difference emerged after the COVID-19 pandemic began. The pre-pandemic increase in lives saved was 11%, but during the pandemic, the increase rose to 32%. These are just a few of the startling statistics in Gaggle’s annual national student safety report, Through the Gaggle Lens: The State of Student Safety 2019–20 School Year.

“With school now taking place in our students’ living rooms and bedrooms, safety is more important than ever,” said Jeff Patterson, Gaggle's founder and CEO. “Many educators are concerned that without in-person school, they may not be able to identify students in abusive situations or those suffering from mental illness. We hope Gaggle can be part of your district’s plan to help students who are in crisis.”

● 64,000 references to suicide or self-harm in students’ online activity. Of these, more than 5,600 were serious enough to merit immediate attention by the district.

● 38,000 references of violence toward others. More than 1,600 warranted an immediate call to prevent a potential incident.

● 18,000 instances of nudity or sexual content, of which more than 2,400 were identified to be child pornography.

A special section of the report examined changes in student behaviors and trends during the pandemic. As students were isolated in their homes, certain behaviors declined. For example, incidents of violence toward others, as well as drugs and alcohol, decreased 43% and 23% respectively after school closures.

However, two other trends were noted during this time:

● A 21% increase in nudity and sexual content involving minors that required an immediate response from the district.

● Four out of five of the highest weeks of reported domestic abuse occurred from mid-March to mid-May. Imminent threats—incidents where a life is in danger, or there is an imminent threat to the well-being of a person—increased 79% compared to previous weeks in the year when students were in school.

These figures come from Gaggle’s student safety solution, which analyzes the use of online tools within Google’s G Suite, Microsoft Office 365, Google Hangouts, Microsoft Teams, and the Canvas learning management system for more than 4.5 million students across the United States. During the 2019–20 school year, the platform analyzed more than 6.25 billion items within school accounts for harmful content.

Gaggle’s machine learning technology watches for specific words and phrases that might indicate potentially harmful behavior. When a match surfaces, the content is evaluated by a trained safety professional to determine whether it is a threat and how much of a threat it poses. They then alert school officials to signs of student self-harm, depression, thoughts of suicide, substance abuse, cyberbullying, credible threats of violence against others, or other harmful situations.

Before and during the pandemic, the majority of incidents happened outside school hours when educators weren’t actively watching what students were posting online. Gaggle’s 24/7/365 service and its ability to quickly identify, act on, and alert districts of potential problems allow educators to have peace of mind even when they are off duty. “We get information on weekends, holidays, evenings, and all times of the day,” said Principal Steve Lehman of Northern High School in Pennsylvania’s Northern York County School District.

Through the Gaggle Lens: The State of Student Safety 2019–20 School Year can be downloaded at https://news.gaggle.net/19/20-safety-report

About Gaggle | http://www.gaggle.net
Since 1999, Gaggle has been the leader in helping K-12 districts manage student safety on school-provided technology. Using a powerful combination of artificial intelligence and trained safety experts, the safety solution proactively assists districts 24/7/365 in the prevention of student suicide, bullying, inappropriate behaviors, school violence, and other harmful situations. Most importantly, Gaggle continues to help hundreds of districts avoid tragedies and save lives, while also protecting their liability. During the 2019–20 academic year, Gaggle helped districts save the lives of 927 students who were planning or actually attempting suicide. For more information, visit https://www.gaggle.net and follow Gaggle on Twitter at @Gaggle_K12.

Through the Gaggle Lens: The State of Student Safety 2019-20 School Year