Schools and communities in Mozambique gain access to clean water

More than 2,000 people in Ntsungo have clean water access thanks to funding from the Salesian Missions “Clean Water Initiative 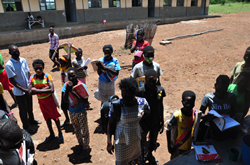 The region, which is home to more than 8,000 people, lacks access to health services and clean water. It only has one primary school. Among the beneficiaries, 60 percent are women and 40 percent are men. Most of the communities have many children and older youth.

With the funding, Salesians were able to drill a borewell, install solar powered pumps and create a water system with three plastic tanks with a capacity of 5,000 liters each. Water is channeled to the communities and to the primary school. Water fountains were also set up in the communities so that people could access the water.

“Salesian Missions has made clean water projects a priority for the health and safety of those we serve,” said Father Gus Baek, director of Salesian Missions. “This community had little access to clean water prior to this project. Now people can access water in the communities and right at the primary school, helping to ensure safe drinking water and proper sanitation.”

Salesian missionaries have been living and working in Mozambique for 110 years, providing education and social development programs for poor youth. The country gained its independence in 1975, but a civil war erupted in 1977 and lasted until peace treaties were signed in Rome in 1992. The civil war left some 60,000 youth with few employment prospects, little training and war being their only education.

Mozambique has made great strides in reducing poverty, according to the World Bank. But with nearly 50 percent of the population still living in poverty, progress has not been fast enough. Poverty is concentrated in rural areas, and even with growth within the country, the regions of Zambezia, Sofala, Manica and Gaza saw an increase in poverty in the 2000s.

More than 70 percent of those living in poverty reside in rural areas and rely on farming and fishing to make a living. The vast majority of the rural population lives on less than $1.25 a day and lacks basic services such as access to safe water, health facilities and schools.

###
About Salesian Missions USA
Salesian Missions is headquartered in New Rochelle, NY, and is part of the Don Bosco Network—a worldwide federation of Salesian NGOs. The mission of the U.S.-based nonprofit Catholic organization is to raise funds for international programs that serve youth and families in poor communities around the globe. The Salesian missionaries are made up of priests, brothers and sisters, as well as laypeople—all dedicated to caring for poor children throughout the world in more than 130 countries and helping young people become self-sufficient by learning a trade that will help them gain employment. To date, more than 3 million youth have received services funded by Salesian Missions. These services and programs are provided to children regardless of race or religion. For more information, go to SalesianMissions.org.